AARP Poll: Rauner Has Edge Over Quinn Among Senior Voters 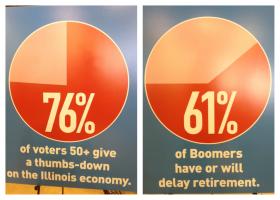 The debate over state retiree pensions has been a consistent backdrop for the Illinois gubernatorial election, bringing older voters to the forefront of many debates. It's this senior voting bloc that could make all the difference this election.

Listen
Listening...
/
As Hannah Meisel reports, a recent survey by AARP reveals Illinois voters over 50 are more likely to vote for Republican candidate Bruce Rauner over Democratic incumbent Governor Pat Quinn. But senior issues in the governor's election are more nuanced than a partisan split.

The Illinois Building on the State Fairgrounds in Springfield is buzzing with activity. But it's not prized cattle or blue-ribbon pies fair attendees are taking in. Along one wall, it's an array of motor scooters. Along another, it's rows of booths offering different kinds of home care.

It's Senior Day at the Illinois State Fair.

One of the largest displays in the atrium is for AARP, one of the most recognizable groups in senior advocacy in the United States. Fittingly, AARP Illinois used Senior Day to announce the results of its latest poll, which sought to put senior issues in the context of the governor's race.

Republican candidate Rauner may hold an edge over Democratic incumbent Governor Pat Quinn among Illinois voters 50 and over. But AARP's survey revealed a more nuanced set of needs from older voters.

That includes John and Ida Ryan, who live in Springfield. John is 81, a retired state worker whose pension provides the couple with roughly $1,000 per month. He says that's not nearly enough. 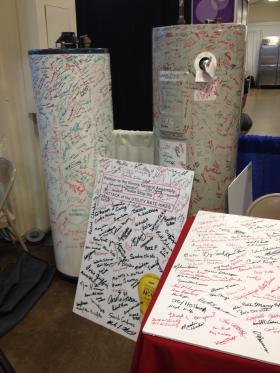 "Cost of food, our real estate taxes are up, our insurance is up, heating is terrible, it's gone up," he said. "By the time you get done paying, you don't have any money. We haven't had a vacation since 1998."

That was the year after John retired, in 1997. But he kept working until three years ago; after leaving the state lottery, he took a part-time job at a local bank, just to feel more secure in retirement.

The Ryans are frustrated with the debate over state retiree pensions and healthcare, both of which have been threatened by legislation in the past couple of years.

A recent decision by the Illinois Supreme Court blocked efforts to reduce retirees' healthcare benefits, but a court decision is pending on overall pension benefit reduction.

Asked who the Ryans might vote for in November:

But that doesn't mean John supports Rauner's pension idea: to halt pensions altogether and move state employees to a 401K-style retirement system. John says he worries investing retirement savings in the stock market, like 401K plans do, is too volatile.

Besides pensions and 401Ks, another retirement buzzword floating around Senior Day is Social Security. As baby boomers retire, more Social Security is being collected than ever before.

Two of those baby boomers, Alvin and Mary Ellen Jones of Chicago, are on the cusp of collecting Social Security. Alvin has one more year left until retirement, at which point he estimates he and his wife will rely on social security for 70 percent of expenses.

He says he's worried about the safety of his Social Security once he becomes dependent on it, something he says leaves him with few political options.

"I'm forced to vote Democrat (I'm an Independent) because the Republicans have been talking about nothing but cutting," Alvin said.

The Joneses say health care isn't a huge concern or cost for them right now, since they're both healthy. But, Alvin says, he knows one accident could set them back...way back.

Especially because Mary Ellen tries her best to avoid mainstream medicine, and instead seeks out what she calls "alternative medicine." But that kind of care isn't covered by most insurance plans. "I may use a chiropractor, I may use a homeopath, and all of those people come out of my pocket."

If Mary Ellen continues to choose those kinds of treatments, it could become a bigger chunk of a shrinking income as the couple moves into retirement.

One thing workers won't have to worry about come retirement is an income tax. That is, at least for now.

Though Quinn has ruled it out, Rauner has not. And some government research groups, like the Chicago-based Civic Federation, have said it's a necessary step in balancing the state's budget.

But AARP Illinois refused to even ask that of Rauner or Quinn in their candidate questionnaire, due out in the next week or so, according to Gerardo Cardenas.

"We don't think it should be part of a political discourse in this election cycle," he said. "People already in the survey are telling us they pay too much in taxes."

AARP will distribute a voter guide to its 1.7 million Illinois members before the November election. While AARP itself doesn't endorse specific candidates, its members are a group both campaigns will be vying for.

The AARP says Illinois has improved opportunities for elderly people to remain in the community. But it says there are still too many living in nursing homes who need not be.

There are good reasons for helping seniors to stay independent, or at home, getting help -- and out of long-term care facilities.

Bruce Rauner -- the Republican nominee for Illinois governor -- says he followed the letter of the law when filing his taxes.  But he won't say whether it was fair.

Rauner, a businessman, has said his wealth puts him in the top .01%.

Even so, a Chicago Tribune analysis showed that in several recent years, he paid no Social Security or Medicare taxes.

Rauner has released limited parts of his tax returns.

It's believed he took advantage of I-R-S rules to legally cut his tax burden.

How The NRI Hearing Could Play Out For Quinn's Campaign

Governor Pat Quinn's troubled anti-violence program will be in the spotlight today (7/16) when a bipartisan legislative commission meets in Chicago.

It's not yet clear how lawmakers will proceed, given that the federal government wants them to put a hold on their investigation until mid-October, just before the November election, when Quinn will face Republican Bruce Rauner.