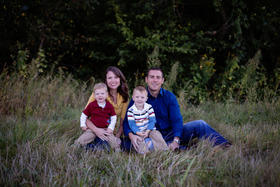 Last year, Illinois was one of a handful of states that lost population. More than 90,000 people moved elsewhere.  It became a campaign issue for Governor when then candidate Bruce Rauner criticized the state's lack of friendliness to business. And it has others  throwing up caution flags.   The numbers don't mean mean there is a crisis, or even a real clamor, to leave the state.

Listen
Listening...
/
Bill Wheelhouse tells us about whether Illinois is really losing population.

I talked to a number of people who had left Illinois. Their reasons vary -- retirement to a warmer area,  moving closer to family, or a getting better job were often in the mix of things. Most of their reasons weren't directly related to the state's job, political or tax climate.   However one of those who kind of fits that bill is Tonya  Hilliard.

"I'm 32 years old  I've been married over eight years about eight half years. I'm expecting our third boy in about six weeks, I taught special education for about seven years and now I'm a stay at home mom "

The Naperville native and her family moved to LeClaire Iowa near the Quad cities:

"We are on the Mississippi river.  I can see Illinois from my back yard".

Tonya says she and her husband were living in Schaumburg and looking to move out of Illinois, or at least out of Chicago land because of the high cost of living and congestion in Cook County. They looked at a number of out of state locations, but also considered other parts of Illinois, like Peoria. They opted for Iowa where her husband is a sales representative  for an office furniture manufacturer.

It is true Illinois lost population overall last year, but what is debatable is whether there is a true exodus.   In his State of the State Address, Governor Bruce Rauner mentioned that over the past dozen years 250,000 people picked up and moved out of Illinois.   That is correct.   However people also moved in to the state and and were born here.  With the exception of last year,  population  has generally grown in Illinois at a small rate.

But that loss should not over over looked says Michael Lucci of the Illinois Policy Institute.

"This is a very dangerous trend. Its very painful and its costing communities a lot of tax dollars. Because when working people leave, they take their income, their tax dollars and their job opportunities with them."

The fix in Lucci's view is fewer regulations for businesses when they start up, and reducing the red tape and associated costs for the businesses already in place.  He says Illinois should be more open to entrepreneurs like  Austin, Texas.

It is worth noting that the states that have been gaining residents such as those in the southern United States and Southwest have long been pulling people not just from Illinois but all over the Midwest and northeast. And its been taking place for  decades   Darren Lubotsky studies such issues for the University of Illinois Institute for Government and Public Affairs.

"You know people like to say  population growth is faster in Wisconsin and Indiana, than in Illinois. Which is true. But all three of those states rank pretty low in terms of population growth.  There are issues Illinois needs to confront, but I don't think we should be using the population  as a measure we are doing well or not," he said.

William Frey, a demographer at the Brookings Institution says the recession slowed down  movement across the entire country and it is just now picking up.

" It is only in the last year or so where we se an evidence that fueling migration  back into those areas in the sunbelt has started to pick up and that may be a little bit of been the reason why see  this increased out-migration in Illinois in the last year.

In Frey's view is it not a cause for concern unless it becomes a long term trend.   Frey says Illinois and other Midwestern states can hope for slow growth at best in the coming years.  And  projections for the state predict that for the rest of the decade, Illinois population will grow at a low rate (.02). (see pages 29-32&38-40)

The most significant age group in the national population shifts are those in their 20's and early 30's.  They are  the ones that will move the most for job.  And in the case of Tonya Hilliard, who moved from Illinois to Iowa, a return is not out of the question.

Hilliard says she could see herself making the quick trip across the Mississippi when she resumes teaching in several years. She's already in the Illinois Teachers Retirement System and says that would be a good reason to continue her work in Illinois schools.

Dick Humes squinted and sweat as he moved down a row of corn. He sliced through the husk with a metal hook in his right hand, snapped the ear from its stalk with his left, and threw it over his shoulder into a wagon rolling alongside him.

Macomb's next budget year begins in less than a month (May 1) and the city is bracing for cuts in state funding. The city council plans to pass a balanced budget, despite Republican Governor Bruce Rauner's proposal to cut in half cities' share of the state income tax. That would mean a loss of more than $1 million for Macomb.

Falling Union Membership? The Governor of Illinois Has A Theory About That ...

Governor Bruce Rauner has spent much of his first few months in office talking about labor unions. He’s shared not only policy proposals, but also his ideas about the history of the union movement.