Candidates For Illinois Governor To Meet In First Debate This Week

As of Monday, there are 50 days until Election Day. And in the race for Illinois governor, debate season is finally getting underway.

Republican Gov. Bruce Rauner and his Democratic challenger, J.B. Pritzker, will meet in three formal debates in the coming month.

The first takes place this Thursday, and it’s sponsored by NBC Chicago and Telemundo, As well as the Union League of Chicago and the Chicago Urban League.

After that, there’s one more Chicago debate (October 3, sponsored by ABC Chicago, Univision and the League of Women Voters) and one in Quincy (October 11, sponsored by WGEM-TV and the Illinois Broadcasters Association).

The Rauner campaign has reportedly pushed for more, but Pritzker has refused — including attempts by PBS and NPR stations.

“Those are the debates that are on the calendar, and those are the ones we’re doing,” Pritzker told reporters Friday morning. 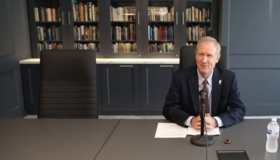 That was the same day Pritzker skipped — despite repeated invitations — a joint appearance with Rauner before the editorial board of the Chicago Tribune.

The Tribune broadcast the meeting online and left an empty chair for Pritzker. But at least one fellow Democrat, Illinois U.S. Senator Dick Durbin, would not criticize his absence.

“I’ve appeared before that editorial board,” Durbin said. “For a Democrat, it’s an act of courage to step up there — you know what you’re facing. They’re totally opposed to Pritzker and the Democrats and have consistently held that position.”

Also on Friday it came out that Pritzker did agree to a joint appearance with Rauner at the editorial board of the Chicago Sun-Times.

The first debate will also include the Libertarian Party candidate, Kash Jackson, as well as state Sen. Sam McCann, who left the Republican Party to run as a Conservative.

A Libertarian spokesman says they don’t yet know whether they’ll be allowed in the second and third debates.

Rauner gathered about 65 supporters in a hotel ballroom in downtown Chicago.