Chinese Tariffs On U.S. Soybeans All But Inevitable As Deadline Nears

After months of verbally sparring with trade partners, the United States is poised to implement wide-reaching tariffs Friday on imported goods, and one in particular has the agriculture economy on edge: soybeans.

U.S. farmers export soybeans to China to the tune of $12 billion a year. China announced it would retaliate for America’s tariffs on things like aluminum and steel with a 25 percent tariff on goods it gets from the United States. In April, China imposed tariffs on U.S. pork.

From hogs to corn, market prices have dropped across agriculture in the last few weeks due to trade pressures. A lot of these commodities — like corn —are still doing better than they were a few months ago.

One exception is soybeans, prices for which haven’t been this low since March 2016. The bean’s price slid 20 percent from mid-April to July, landing at $8.48 a bushel. 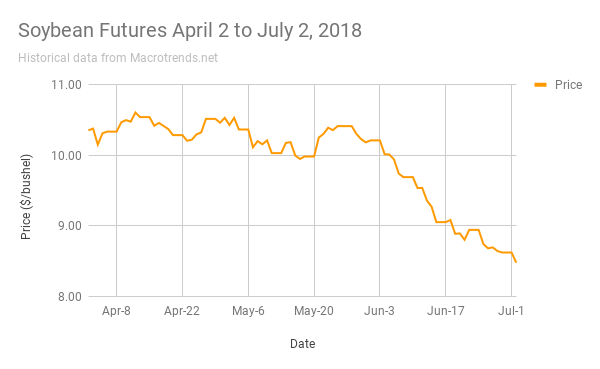 “Hopefully we are still thinking about putting on these tariffs only short-run,” Zhang said, “and we are still in a process of negotiating for further resolutions of the trade disputes.”

The Chinese import so many soybeans because even with increased domestic production they cannot grow enough to satisfy their own needs, Zhang said. But the country wants to use all of the tools available to stand up to pressure from the United States, he added.

“The Chinese government are learning better how to play using the WTO (World Trade Organization) rules and using their domestic policies as well,” he said, explaining that China this year imposed stricter purity expectations on soybean imports.

China also is importing more soybeans from Brazil, which some observers believe will be  difficult to reverse.

Kevin McNew is chief economist of the Farmers Business Network, a startup that helps farmers get the best deals they can with buyers.

“I think the long-term implications are pretty concerning,” McNew said. “We’re already starting to see the effects in Brazil. Farmers there are already thinking about planting for their next season’s crop, which they’ll plant in August and September.”

Brazil’s farmers may plant as much as 5 percent more soybeans, he said. But he noted that many U.S. farmers locked in higher prices in the spring, so they may not lose as much as current prices suggest.

This story is part of the special series United And Divided, which explores the links and rifts between rural and urban America.

Rural voters overwhelmingly chose President Donald Trump in the presidential election. But when it comes to the central campaign promise to get tough on trade, rural voters are not necessarily in sync with the administration.

Down Times in Farm Country Persist, But Not Yet a Crisis

Farmers across the Midwest are trying to figure out how to get by at a time when expected prices for commodities from corn, to wheat, to cattle, to hogs mean they'll be struggling just to break even.

To Diversify the Landscape, Diversify Who Works It

Farmers in the U.S. like to point out that their products feed people all over the world. And while this is a diverse country, the people working on farms and elsewhere in agriculture often don't reflect the nation's demographics. Changing that is becoming a priority, in hopes new people will bring fresh ideas to meet some of our food system's greatest challenges.

Thursday had all the makings of deja vu for the U.S. House’s farm bill draft: immigration concerns, uncertain Republican votes and a wall of Democratic opposition to changes in the main federal food aid program.

In the end, the chamber avoided a repeat of May’s failure, when members of the conservative Freedom Caucus wanted to deal with immigration first. But the farm bill passed Thursday — narrowly, 213-211. Still, 20 Republicans voted against it, as did every Democrat in the chamber.