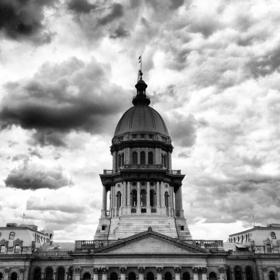 Democrats in the Illinois House Thursday held a hearing over the salary for one of Gov. Bruce Rauner's top aides.

The issue is not that Education Secretary Beth Purvis is being paid $250,000 a year, but where the money is coming from. Rather than the relatively small budget for governor's staff, her salary comes out of the Department of Human Services.

It's not an uncommon practice, but Rauner targeted human services for cuts earlier this spring.

Another Rauner aide, Rich Goldberg, says the issue is just a distraction.

"I do believe this is a sham hearing, held simply to distract the public from a $4 billion budget hole you just created," Goldberg said. "I think everybody knows that."

But Democrats like Rep. Greg Harris say it matters because so many human services are on the chopping block.

Goldberg initially tried to portray the questions about Purvis' salary as sexist. The administration issued a statement detailing the salaries of some of the highest-paid legislative staffers.

Democratic Representative Kathleen Willis said she took offense at the attempt to make it an issue of gender.

"It has absolutely nothing to do with gender. In fact, we're not even necessarily questioning the worth of Ms. Purvis," Willis said. "Her resume speaks for itself. We're questioning why it's in this department's budget."

Purvis did not make an appearance at the hearing.

Illinois law gives political candidates five days to report campaign contributions of $1,000 or more, but it's been weeks since Gov. Bruce Rauner gave Republican lawmakers four times that, and some still haven't told the state. But they aren't breaking the law.

It was May 11 when Rauner's campaign spread $400,000 among Republican senators and representatives, but you wouldn't know that from looking at state election records. Many legislators still haven't disclosed the money.

Battle For The Future Of Illinois

Illinois' legislative session was supposed to be over by now. The schedule published months ago marked Sunday, May 31st as the adjournment date. Legislators typically don't return to Springfield until the fall. Instead, members of the General Assembly will be back beginning Thursday for a "continuous" summer session.

Illinois leaders have another month to settle on a new budget plan, but given their failure to reach a deal by Sunday's initial deadline, Gov. Bruce Rauner says he must take immediate steps to manage state spending.