As Electric Cars Shift Into Mainstream, The Corn Belt Begins To Ponder A Post-Ethanol Future

At Hummel’s Nissan in Des Moines, Kevin Caldwell sells the all-electric Leaf. Driving one is basically the same as driving a typical gasoline or gas-electric hybrid car, he said, except for a few new features like the semi-autonomous hands-free option. And the fact that you plug it in rather than pumping gas into it.

About a quarter to a third of Caldwell’s Leaf customers are farmers, some of whom grow corn for ethanol. 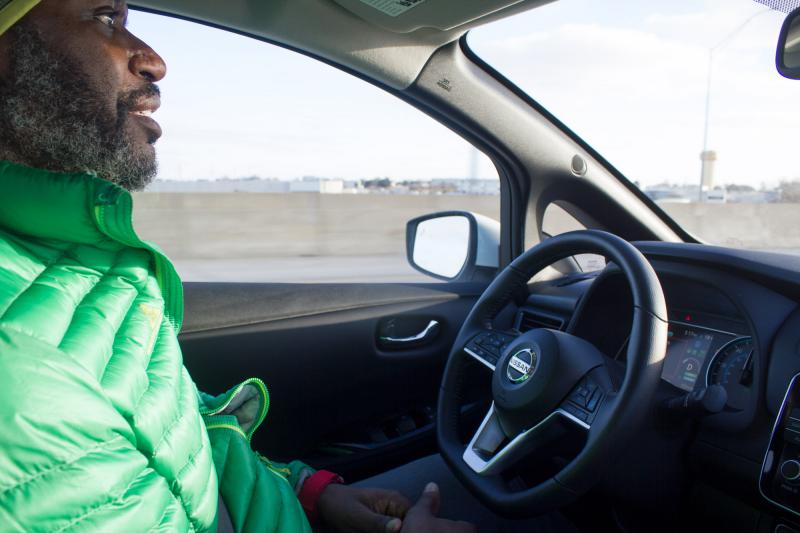 “You typically get two types of customers,” he said, “The customers that are more environmentally conscious and they want to lower their carbon footprint versus the customer that is simply wanting to not have to worry about gas prices.”

One million electric cars were sold in the U.S. in 2018, and while states with stricter emissions standards, such as California and Oregon, lead the way, plenty can be seen on the road even in central Iowa, where corn has long been king.

About 40 percent of the corn grown in the United States gets turned into ethanol for gasoline, but the demand to reduce fossil-fuel emissions could bring pretty drastic changes to agriculture in the Corn Belt. Think acres of corn replaced by perennial crops or the return of small grains such as oats and wheat.

Lee Tesdell is all-in for reducing his carbon footprint. He began installing solar panels on his farm in Polk County, Iowa, in 2013.

“And all the time I was thinking that I would like to drive an electric car,” he said, “so that my solar electrical production would be part of the fuel for my electric car.”

In December, he bought an all-electric Chevy Bolt for his commute.

Government-backed ethanol has been a boon to corn farmers, but Tesdell said it’s led to overproduction, which in turn has kept corn prices low the past several years.

“I would like to see corn acres reduced by quite a lot in Iowa and more diversification,” Tesdell said. 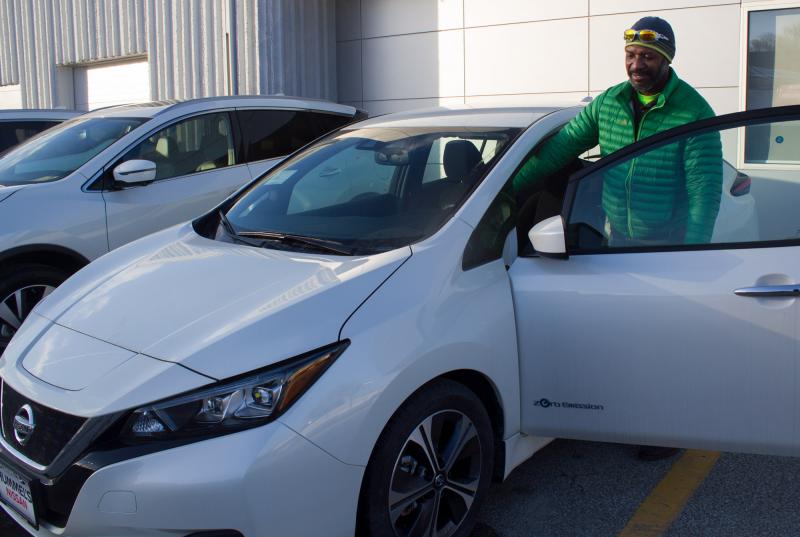 He’s doing that himself, with a variety of conservation practices as well as raising sheep and growing alfalfa. He also has dozens of acres he rents out to a farmer who plants corn and soybeans. They’ve discussed other possible crops, such as industrial hemp or cereal rye for cover crop seed, but they’re still in the research stage. It’s risky and can be hugely expensive to change a crop rotation.

Transitioning away from corn and into alternative crops could have multiple benefits for farmers and the environment.

First, from a business standpoint, farmers need to anticipate market changes, according to Trevor Russell, water program director at Friends of the Mississippi River, an environmental nonprofit.

“Let's not be left holding the ball on 40 percent of our corn crop that doesn't have a market and can't get sold anywhere,” Russell said. “That would be an economic catastrophe for farmers and for rural communities that rely on agricultural economies and for, really, the entire Corn Belt.” 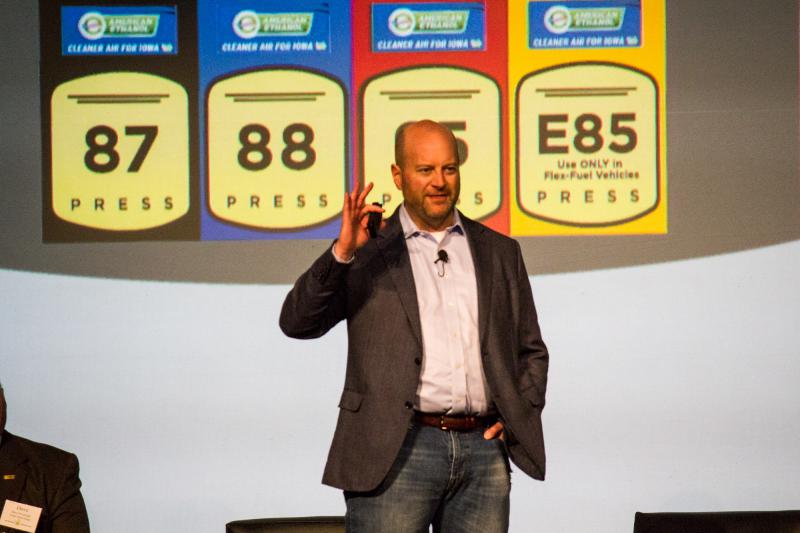 And secondly, different crops like kernza wheat or the oilseed camelina could help clean up polluted waterways and nurture depleted soils.

But Russell said it’s going to take the same types of government policies and incentives that expanded ethanol to establish viable markets for other crops. Without those, farmers – and their creditors – won’t see new crops as potentially profitable and won’t be able to invest in the necessary changes.

Russell is actively forming partnerships with agricultural groups and said his advocacy for water quality has morphed into an agriculture policy job as he works to help develop these new markets. He said he feels a sense of urgency, too, because even though no one can predict the timeline for the transition to electric cars, it’s clearly underway.

“Retooling our cropping system to respond to that is going to take longer than the transition to electric vehicles will take,” Russell said, “So we need to start yesterday.”

John Eichberger of the Washington, D.C.-based Fuels Institute attended the 2019 Iowa Renewable Fuels Summit to discuss what he foresees in the transition to electric cars. He told ethanol-industry experts not to panic … yet.

“We have people thinking, ‘Well, it's gotta be electric,’ or ‘It's gotta be liquid,’” Eichberger said of the future of cars. “It's probably going to be a combination for a long time because we're not going to transition 100 percent.”

That’s something Rand Faaborg knows well. He’s a welder by trade and commutes 20 miles one-way past acres and acres of corn fields every day in a used 2012 Nissan Leaf. But he also raises hogs and cattle, and charges the car in his barn. 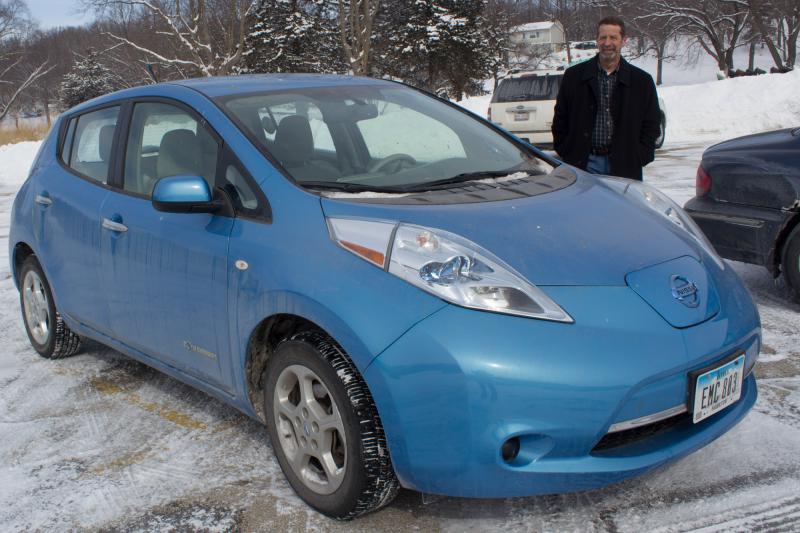 “I have several trucks, cars, tractors. I still use a lot of gas,” said Faaborg, who joked that no one predicted he’d be the first one in the work parking lot with an electric vehicle. He’s proud of his rural Iowa roots; his father-in-law and daughter also farm.

But, he said, “electric is the way to go. And electric will overtake all the automobiles very shortly, I’m convinced of that.”

Faaborg is equally confident farmers will be able to adapt to an eventual reduced market for corn, and in the end, he predicted, everybody will win.

This story was reported, in part, with support from the Institute for Journalism and Natural Resources.

Making a Visual Change for Sustainability

Sofia Tagkaloglou is part of a student group that was inspired during an Environmental Studies course to try bringing solar energy to the Knox College campus. The project began in winter 2015 and was fully realized this summer.

Help Or Hinder? Federal Agencies At Odds Over Biofuels

Scott Pruitt’s resignation from the Environmental Protection Agency this month has many in the renewable fuel industry hoping that federal agencies will get on the same page.

That’s because for the last few years, the EPA and the Department of Energy have been at odds, with taxpayer money creating a new biofuel industry that may not have the room to grow outside the lab.

Ethanol Spills on the Rise in the Midwest

An ethanol spill occurs every two days on average in the Midwest, the worst of which result in contamination of water supplies, major fish kills, loss of life, and millions of dollars of damage.

How Much Corn Could You Pick by Hand in 20 Minutes?

I wiped my palms on my jeans, tugged at the bill of my baseball hat, and took a deep breath. It was my first time competing in the annual Illinois State Corn Husking Contest at the end of September and I was nervous.

Rural hospitals aren’t just providers of medicine and health care, but also are often major employers and a massive part of a town’s tax base. However, mounting challenges are forcing these hospitals to merge and close in droves.