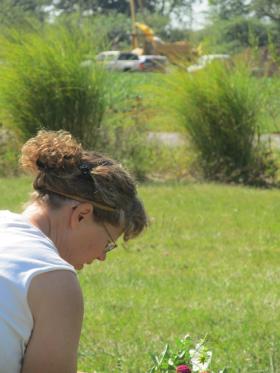 Construction is underway on a new oil pipeline that will carry Canadian oil across several states. The line will begin in Illinois.

In this report, you'll hear about the potential benefits and concerns with the project.

In rural Livingston County, Kathy Carroll picks brightly colored flowers from her large garden. A kitten nuzzles up against her leg and then settles in for a quick nap in the hot sun. Several yards away, this pastoral  scene is changing. Large trucks pass up and down the road with long, narrow pipeline parts. Crops have been replaced with overturned soil, and neon-appareled construction workers halt traffic every couple of minutes.

Start Of Something Big

It’s the start of a 600-mile oil pipeline. Carroll and her family don't seem to mind the commotion or the project itself.

“We know it’s a good thing because our country needs oil," Carroll said. "We are disappointed about having to tear through trees but you just have to do that to do a pipeline."

Detroit Free Press: What Is Dilbit?

As the name suggests, the project originates just outside of Flanagan, Ill. It will pass through Quincy, cross the Mississippi River, and run through Missouri and Kansas to a  storage hub in Cushing, Okla.  Canada-based Enbridge will operate the pipeline. 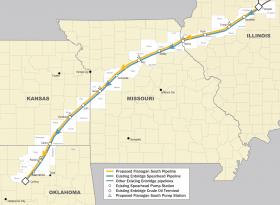 Carroll says one of the most important factors for her is how the company treats the land.

"The only thing that we are slightly concerned about is hopefully nothing will leak, or there will be a spill because that would contaminate our water. Hopefully, they are doing it very safely and very securely.” -Kathy Carroll, Livingston County landowner

Enbridge’s record isn’t perfect. In 2010, oil from one of its lines spilled into the Kalamazoo River in Michigan. The cost of cleanup topped $700 million.

Kevin O'Connor, an Enbridge spokesman, says it's an incident the company never wants to repeat.

"The alarm system itself is different than what it was before. There are also all kinds of things that we learned from that incident that have allowed the company to make changes and adjustments in how we operate and maintain our lines going forward." --Kevin O'Connor, Enbridge spokesman

Kathy Carroll's neighbor Les Ahrends says the construction phase of the project is no surprise.

“They’ve been surveying for the past year, so we’ve known it’s been coming," Ahrends said. "I understand, though, that other people probably weren’t aware it was on the way.”

These residents are already familiar with Enbridge. The new line will run parallel to the Spearhead pipeline, which is also operated by the company. 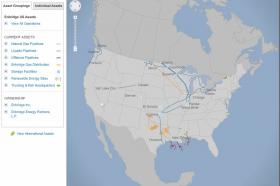 Heather Navarro is the Executive Director of the Missouri Coalition for the Environment. She says her group has serious concerns with the new pipeline.

"People are already familiar with the fact there's a pipeline running through there [Spearhead], but they may not know this is going to be transporting a much larger capacity and a much more corrosive, toxic, dangerous substance than what's going through those pipelines right now," Navarro said.

"It's a thick product that has sand and water and those sorts of things in it," he said. "All of those have to be removed in order to meet pipeline specifications, both from Enbridge standards as well as industry and regulatory standards."

Flanagan Village President Jerome Rocke says he hasn't talked much in person with Enbridge representatives, but they have sent him information packets and he attended an open house. Rocke says he supports the pipeline but can see how others wouldn't.

“I can see if I had 160 acres and they were going right through the middle of it and took my crops out, I was worried maybe there would be a leak in my 160," Rocke said. "I would be concerned too, but I feel our technology is covering any fears that they would have.”

Jobs Along The Line

Around 600 people will work on the Illinois portion of the line. The pipes are three feet in diameter and four feet below the surface. The Michels Corporation is contracted for the first half of the pipeline. A spokesperson says, in Illinois, about half of those employees already work for Michels, and the rest are hired through union halls. The company's safety department is responsible for working with local emergency responders in case something goes wrong during construction.

While planning for the Flanagan South project is completed, the Keystone XL pipeline has been in limbo for five years. That project, which would carry a similar product, is caught up in political and environmental wrangling.

Washington Post: The Keystone XL Pipeline And Its Politics, Explained

"The oil in Canada is going to be produced, and the question is, 'Where is it going to go?' If it goes to the United States, it will have lower emissions for shipping, processing, and consumption. All around, it should be moved on as soon as possible," Felmy said.

Reporter Tina Casagrand covered the development of the Flanagan South pipeline with support from the St. Louis Press Club. She spent several months researching the origins of the product that will flow through the pipeline and how it will affect neighboring Missouri.

"It's a significant amount of oil that is coming out of that region," Casagrand said, "which is why a lot of the pipeline companies are rushing to facilitate the transportation of that oil."

That "rush" is what worries environmental groups.  The Sierra Club and Missouri Coalition for the Environment both filed lawsuits seeking more information on Enbridge’s applications and the environmental impacts. 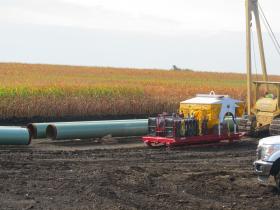 More On The Coalition's Opposition

The Coalition's Heather Navarro says taxpayers should know the details of the new pipeline.

"When something is rammed through this hard with no opportunity for public input or comment, I think we should all be concerned about what's going on here," Navarro said.

Enbridge spokesperson Katie Lange says her company informed residents through open houses with environmental teams, construction engineers and more since the start of the project.

Navarro says, aside from questioning the legality of the project, there's a bigger concern:

"These tars sands are just increasing our reliance on fossil fuels," she said. "If this country cares about jobs and efficiency and moving forward, we need to be investing in renewable sources of energy instead of pouring all of our money and giving these huge handouts to these private companies."

The Army Corps said it does not comment on pending litigation. But, as the lawsuit continues, pipes are still going into the ground.

With an increasing number of pipelines in and around Illinois, questions may arise about responsibility for monitoring them. We'll look at that in the second part of our series "Flowing Through."

A St. Louis-based environmental group has filed a lawsuit against the U.S. Army Corps of Engineers for failing to provide information about a multi-state oil pipeline project that would go through west central Illinois.