Since last weekend's events in Charlottesville, Virginia – politicians and everyday citizens across Illinois have spoken out against the violence and hateful rhetoric.

Listen
Listening...
/
listen to the story

In Springfield, some 300 people gathered outside city hall to denounce hatred and bigotry. Sunshine Clemons, co-founder of the local chapter of Black Lives Matter, helped organize the event to take a stand, “We want to come together in unity and in love.” Even so, she says what happened in Charlottesville was chilling. “It’s very frustrating to look at what’s going on and know that there is so much support for people that hate you.”

State legislators in both the Illinois House and Senate passed resolutions in response. The Senate urged law enforcement to recognize white supremacist and neo-Nazi groups as terrorist organizations. The House condemned the violence. “This, I hope, will help our conscience as we move forward to institute new policies of social justice (and) restorative justice in this state," said La Shawn Ford, a Democratic state representative from Chicago.

Politicians have been out in force this week, making appearances tied to the Illinois State Fair in Springfield. Republican leaders were pushed by reporters on whether or not they support President Donald Trump's claim that “both sides” were at fault for the violence in Charlottesville. After initially hesitating to call the car driving into a crowd an act of domestic terrorism, Gov. Bruce Rauner took a more forceful stand. “I vehemently disagree with the president’s comments about the tragedy in Charlottesville. I vehemently disagree.” In a statement, he explicitly called the death of Heather Heyer and injuries of several others domestic terrorism.

Democratic candidates for governor also spoke passionately about Charlottesville, condemning the violence and hatred. One person in the state has been doing the same for years now as his full-time job. Christian Picciolini was a skin-head for several years in his youth, rising to a leadership level in the nineties. He co-founded the Chicago based organization Life After Hate - helping others leave hate groups and educating the public about their danger. The so-called “alt-right” is a political group that mixes racism, antisemitism and white supremacy, and that calls for the "preservation of the white race." Speaking on the public radio show The 21st, Picciolini said members of the movement have been “emboldened by the words of the president by the actions, and sometimes inactions, of the president.” During the recent protests, torches were carried, like the ones used for intimidation by the KKK. Chants included phrases used by Nazi Germans, as you can witness in coverage from Vice news.

Picciolini says it’s dangerous to portray newer movements in a less extreme light. "The alt-right, they are neo-Nazis, they are white nationalists ... During my eight years spent in the movement, I never felt closer to a race war or a civil rights movement than we are right now."

State Senator Don Harmon, a Democrat from Oak Park, was a sponsor of the resolution suggesting law enforcement take white supremacy as seriously as possible. Resolutions don’t carry the force of law — they’re more like suggestions. As to what the legislature should do further to address the issue? "We need to wrestle with this. And I don’t know what to do. The resolution was a strong statement, but in the end it’s just words," he says. 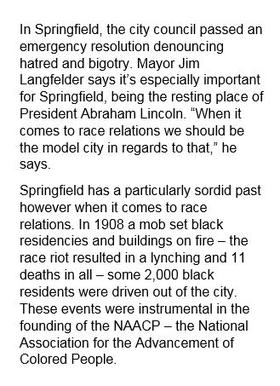 A.D. Carson, a Decatur native, has been tacking the issue of racism for years now. It was essentially the focus of his Ph.D. thesis, which was in the form of a hip hop album. He’s just taken a job teaching at the University of Virginia, located in Charlottesville. The town's plan to remove a statue of Confederate General Robert E. Lee is what drew the white-supremacist demonstrators. Carson was part of the counter-protests. “I hope that people continue to push back against this ... if people call you violent for showing up to stand in the face of violence, then I don't know how we move forward."