Labor unions are attacking Illinois Gov. Bruce Rauner for several vetoes issues late last week. The Republican governor rejected measures that would have raised wages for state contractors that take care of the elderly and disabled. 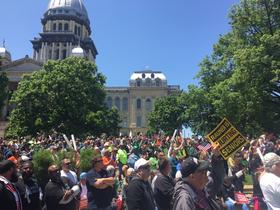 "This is what we saw at Donald Trump's convention this week," he said. "It was a blur of intolerance and division and these vetoes are showing how Bruce Rauner is really bringing the spirit of Cleveland to Illinois."

The legislation also would have mandated training for some child-care providers.

Rauner said he vetoed the measures because the state cannot afford the millions, if not billions, of dollars to implement them. He said Illinois must be financially responsible given the state's poor fiscal condition.

Contract talks between the Rauner administration and SEIU have been dragging on for more than a year.

The governor also used his veto power to suggest changes to legislation on prevailing wage. That’s a law that makes sure workers earn union pay rates on government construction projects.

Gov. Bruce Rauner is apologizing for saying half of Chicago public school teachers are “virtually illiterate.”

Illinois Delegates At Republican National Convention, Where Truth Is Stranger Than Fiction

An Illinois delegation that’s a mix of political newcomers, elected officials, lobbyists and the like have arrived in Cleveland, as the Republican National Convention gets underway.