A referendum that would have asked voters to change Illinois' redistricting process was rejected by an Illinois court Wednesday. However, members of the group Independent Maps said they will appeal to the state supreme court. 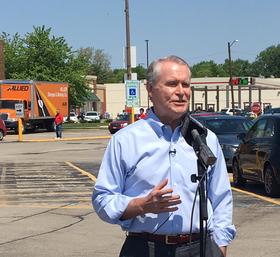 The proposal would give a special commission the power to draw state House and Senate boundaries, instead of legislators drawing the lines.

The group was dealt a blow when Cook County judge ruled the measure does not meet the Illinois Constitution's narrow options for voter initiatives. It said the proposal went beyond simply amending the structure and procedures of the legislature.

"More than 60 percent of Illinoisians say they want to have impartial redistricting, yet the legislators don't want that because they're the ones who get to draw the maps right now and they draw them to favor themselves," he said.

Bray said they're asking for a quick decision by the Illinois Supreme Court, because the deadline for ballot certification is August 26.

"While we would have liked to have won here, we knew that whoever lost here was going to take us to the Supreme Court and they will ultimately decide," he said.

The legal challenge was brought by the Peoples Map, a group that says minority voting rights would be diluted if it passes. But its lead attorney is a longtime associate of House Speaker Michael Madigan and the Illinois Democratic Party.

"This unconstitutional amendment would put a tremendous amount of authority in the hands of unelected middlemen unaccountable to the taxpayers," Hooker said.

“We have it backwards in Illinois," he said in a statement. "Voters should be able to choose their elected officials through an independently-drawn map that ensures competitive elections. Instead, we have politicians choosing their voters, putting politics ahead of people."

A spokesman for Madigan deferred comments to the parties in the case.

When It Rains Redistricting, Ballot Options May Pour

After a dearth of redistricting opportunities, there's a chance Illinois voters could be faced with several options in the November election.

You know how your home might be in one legislative district - but your neighbors across the street might be in another?

A group called Independent Maps wants to change that.

Now, he's heading Independent Maps because he says the process is not fair.

"Our aim is to have our state’s redistricting process produce Illinois House and Senate districts drawn without regard to partisanship or incumbency."