The bodybuilder ordered a Greek Bowl, which was topped with a “natural” turkey burger, produced without antibiotics. Minnelli describes “clean” as a number of things: "not something deep-fried," “non-GMO, no preservatives, something cooked right away, fresh.” 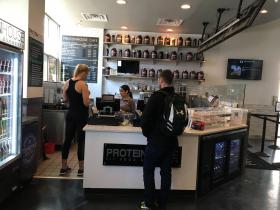 Healthy eaters like Minnelli are helping drive what will be a record year for meat consumption in the U.S., along with cheap meat prices and trends like a “pork craze.” Each one of us, on average, will consume more than 222 pounds of beef, pork, chicken or turkey, according to the U.S. Department of Agriculture.

“We are a nation of protein eaters,” said David Portalatin, a food industry analyst with NPD Group, a global firm that tracks consumer behavior.

Fifty-six percent of consumers named protein as the top nutrient they are looking to add to their diet, according to NPD Group research. Most consumers aren’t going with one fad diet, but rather eating fewer carbohydrates, he said.

“There’s several (low-carb diets) people may be borrowing bits and pieces from,” he said, “but ultimately what the consumer is saying is: ‘I’m going to do what works for me.’”

Despite the rise in interest of plant-based or lab-grown proteins, Portalatin said actual consumption of those things is low compared to the popularity of beef, pork, chicken and turkey. 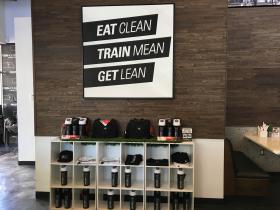 NPD’s research shows that when consumers say they are seeking protein, it’s typically animal protein, though they now talk about wanting it “clean,” a definition that means different things to different people, although it includes terms such as organic, grass-fed, cage-free, or free-range.

Americans also are packing on more protein through eggs and dairy substitutes like almond milk and coconut milk, Portalatin said.

His research shows that consumers don’t really like typical diet definitions, either. It’s true for Thomas Donnelly, who ordered a hummus wrap at ProteinHouse and said he mostly stays away from meat – sort of.

“But then I’ll go have barbeque on the weekends every now and then,” he said.

Donnelly also said he doesn’t like labels like vegetarian or flexitarian – those are people who eat mostly vegetables with some meat thrown in. That makes sense to David Sprinkle, a food market researcher with a company called Packaged Facts.

“A confusing thing about consumer food trends is that conflicting trends are always at work,” Sprinkle said, “often within the same individual and over the course of the same day.”

The meat movement Sprinkle sees is much more towards traditional — and not entirely healthy — dishes: “There is a real celebration of meat of all types, and we’ve seen that with the pork craze, pulled pork sandwiches, the bacon craze, we’re seeing bacon in our candy bars.”

And don’t forget, U.S. supplies of red meat and chicken are at record highs, thanks to a grain glut, so prices at the grocery store are low.

The more cheap meat, the more you’re likely to eat. Though the USDA recommends having five to six ounces of protein daily, it forecasts we’ll consume double that every single day this year.

Massive Corn Crops Necessary to Satisfy Our Appetite for Meat

All week, Harvest Public Media's series Choice Cuts: Meat In America is examining how the meat industry is changing the U.S. food system and the American diet.

Drive down a dirt road, a two-lane country highway, even many Interstates in the Midwest and the view out the window is likely to get monotonous: massive fields filled with acres of corn sprawled in all directions.

Ready For A Cricket Taco? Meat Alternatives Want A Part Of Your The Dinner Plate

All week, Harvest Public Media's series Choice Cuts: Meat In America is examining how the meat industry is changing the U.S. food system and the American diet.

Beef, poultry, and pork are staples of the American diet, baked into the country’s very culture, and backbones of the agricultural economy. But lately, the meats have been saddled with some baggage.

Forget the Robots, Meat Processing is Still a Human's Job

Slaughterhouses and meat packing plants throughout the country employ a lot of people. About a quarter of a million workers in the U.S. stun, kill, and eviscerate the animals we eat. Most of those jobs are physically demanding and require few skills.

Widespread Drought Across US Stoking Fears That 2012's Devastation Will Repeat

Western Illinois might be close to the Mississippi and Illinois rivers, but it’s the driest part of the state this year.

“We really haven’t really had any measurable rain since the middle of October,” says Ken Schafer, who farms winter wheat, corn and soybeans in Jerseyville, north of St. Louis. “I dug some post-holes this winter, and it's just dust.”

"What Are We Gonna Do With Them?" Livestock Hauling Industry Concerned About New Federal Rules

A new, widely debated federal mandate requires truckers to electronically track the number of hours they're on the road — a rule that is meant to make highways safer. But there is a big difference between hauling a load of TVs and a load of cattle destined for meatpacking plants.