Mo. Legislators Received More Than $330,000 From Lobbyists In Two Months 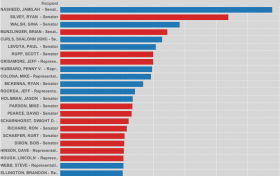 In just two months this year, Missouri legislators and state-wide officials received more than a third of a million dollars in gifts from lobbyists. Expensive meals, basketball tickets and clothes are all common gifts to the people that craft our laws and govern us.

Probably none of this is surprising to you. It's fairly understood that lobbyists spend a lot of money on public officials. But there hasn't been an easy way to break down that large, and often foreign-seeming $338,396  that lobbyists spent on politicians.

That's why St. Louis Public Radio is starting a new project to keep track of that money, and hopefully answer the questions of who's giving it, who's receiving it, and what it's going toward.

You can access our interactive chart that details literally every gift a legislator receives. By clicking on a portion of the chart, you can see how much the gift was, who it was from, and what it was for (if that last part is disclosed).

The Missouri Ethics Commission, which keeps track of lobbyist expenditures, makes the data available two months after the fact. Right now, our graph deals with January and February, but will be updated at the beginning of every month with the most recent information.

More than 90 percent of the money lobbyists spent on gifts was for meals. This is in spite of the fact that Missouri lawmakers receive a per diem of $104 for every day the legislature is in session, going toward food and lodging. That money is paid for by taxpayers, and the state cannot be reimbursed for it.

Also, most of the money didn't go to legislators directly. Less than a quarter of the total money was disclosed as going directly to a specific lawmaker. The other 75 percent went to the "General Assembly" or various committees.

This is problematic for multiple reasons. One being that it obfuscates where that money is going and disperses the responsibility for that gift to a larger crowd. The other is that the application to the larger crowd seems dubious. For example, Senate President Pro Tem Tom Dempsey (R) received more than $400 worth of fruit in his office, courtesy of the Missouri Insurance Coalition. Except that it wasn't sourced to him, it was disclosed as expenditures for "the Entire Missouri Senate." He wasn't the only one, either. Similar expenditures were made and obscured to Speaker of the House Tim Jones (R) and Representative John Diehl (R).

It's worth pointing out that accepting money from lobbyists appears to be one of the few bipartisan issues, with both parties accepting tens of thousands of dollars in gifts. Republicans accepted $42,000 and Democrats accepted $32,000. The other $260,000 went to the general assembly or committees in the House or Senate, both of which are ruled by Republicans.

Senator Jamilah Nasheed (D) received more than any other legislator. She received more than $3,000 in gifts, but at least a thousand of that went toward a legislative black caucus event. The second largest recipient was Senator Ryan Silvey (R). The majority of his roughly $2,700 in gifts were for meals.

Tomorrow we will be releasing the second part of our project, taking a look at which businesses are giving the money. This is planned to be a long-term and ongoing project, with St. Louis Public Radio going into greater depth on specific spending and trends in the future.

St. Louis Public Radio is launching a new data-oriented project that will be keeping track of all the money Missouri legislators receive from lobbyists. In our interactive graphic, you can see every gift a legislator has received.

If you notice something that sticks out to you, send me an email at cmcdaniel@stlpublicradio.org