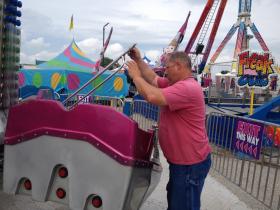 With the Illinois State Fair set to begin later this week, officials say they have safety in the forefront of their minds. The event, which attracts nearly 1 million visitors yearly, is set to open Friday morning ... though anyone can get an early preview Thursday evening after the annual opening parade.

State officials say the heavy crowds can be a concern, especially if weather is hot, and for families with small children. Public health officials urge fair-goers to wear sunscreen and insect repellent, drink plenty of water and wash hands as often as possible.

As for carnival rides, Ryan Culton, with the Illinois Department of Labor, asks parents to use their best judgment.

"Come to the Midway, watch the rides with their kids," he says. "If they don't feel safe or if they're acting scared on the ground, they could be frightened even more when they're actually on the ride and we don't them want exiting the ride, trying to wiggle out."

The agency's amusement ride safety division has spent the summer making the rounds to conduct thousands of safety inspections on carnival rides.

But the Culton says getting those five engineers around the state has been a challenge.

He says because of budget restrictions on travel, the agency has had to get creative. He says schedules and routes are carefully mapped to find the most efficient paths from one fair to the next. But, Culton says, that has not affected the quality of the team's work.

Culton says the labor department's team of engineers will routinely inspect rides throughout the fair's ten days. The event runs through August 17th.

Illinois' two state fairs did not comply with the law last year, according to a recent state audit -- and budget realities mean that'll happen again this summer.

The audit found that both the fairs in Springfield and DuQuoin overcharged entrance fees for horses.

But the Department of Agriculture says it's a consequence of the state contributing 200-thousand dollars $200,000 less toward the purse.