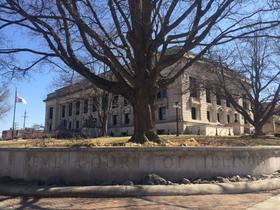 Illinois is facing a budget hole in the billions, thanks to a rollback of the income tax. If the high court tosses out the pension law, there'll be more fiscal pressure.

Analysts like Moody's Ted Hampton say the rating won't likely drop further, even if the justices toss the law because the rating already presumes the law cannot be implemented.

"Our rating assumes that the constitutional protection is too high a hurdle for the state to get by," Hampton said.

If the Court does uphold the law and its benefit reductions, it's likely Illinois could see a positive effect.

Still, Hampton says the future of Illinois' credit worthiness doesn't all necessarily all come down to the court's decision.

Union members and state employees can expect another pension battle ahead, regardless of what the Illinois Supreme Court says about the the current law meant to stem the tide on pension expenses.

Republican Governor Bruce Rauner says he'll push forward with his pension fix no matter how the seven justices rule on the 2013 legislation that was passed and signed into law before being put on hold by litigation.

A four-month nationwide search has led to the appointment of the State Universities Retirement System.

Bryan Lewis will soon direct the $17 billion pension fund.  Lewis currently manages and does the investment strategy for the state of North Carolina's retirement systems.

His resume also includes time at CitiGroup and Merrill Lynch, as well as other companies.

The many years legislators spent crafting a measure to rein in the state's pension costs came to a head yesterday in 52-and-a-half minute hearing before the Illinois Supreme Court. It's now up to the seven justices whether a law that reduces employees' and retirees' benefits is constitutional.

Even before then-Gov. Pat Quinn signed the pension overhaul into law just over a year ago, everyone knew it would come to this.