Pension Law Back Before State's High Court: Been There, Done That. Or Is This Time Different? 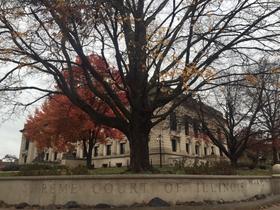 The Illinois Supreme Court is taking on another pension case, six months after justices unanimously tossed out the state's landmark pension law. Tuesday they heard arguments as to whether a law affecting thousands of City of Chicago employees is constitutional or not.

Illinois had tried to argue its underfunded pensions were such a drain, the state had to cut retiree benefits and raise the retirement age. Justices weren't impressed; in May they ruled that defies a constitutional clause that says benefits can't be diminished.

Now, Chicago is looking to do the same. But a bunch of unions signed onto this package. The Chicago law also includes an actuarial funding guarantee.

City attorney Steve Patton says that's no diminishment of benefits; it's a net positive. "They won't just have an empty promise.They will have a fund with billions of dollars in it that will pay their benefits," he argued before the court.

After, Patton added "to say that somehow the constitution is so restricted that an act so beneficial to the funds and their participants is somehow unconstitutional turns the clause on its head."

But Clint Krislov, a lawyer for employees contesting the law, says what Chicago's trying is no different than the unconstitutional state version.

Municipalities across the state looking to control their own pension costs could take cues from whatever justices decide.

The Chicago law, which passed the legislature in the summer of 2014, affects only two of the city's pension funds, the municipal workers' and the laborers'. The city is also raising property taxes in an attempt to halve a $19.5 billion pension debt within the next 40 years.

The Illinois Supreme Court has once again ruled in favor of tobacco giant Philip Morris. The decision, announced Wednesday, saves the company from a $10.1 billion judgment.

Illinois might not be done with the 2013 law reducing state employees’ pensions. Attorney General Lisa Madigan appears to be preparing an appeal to the U.S. Supreme Court.

What's Next For Pensions, Now That Court Has Tossed Illinois' Law?

It took legislators years of talking about Illinois' pension problem before they did much about it. There was a 2011 law that affects state employees, university professors, and public school teachers hired after that time. Then in 2013 they passed a law that reduced current workers' and retirees' benefits. Nearly immediately, workers and their unions sued, calling the law unconstitutional.