Plan Would Give More Freedom To Student Journalists 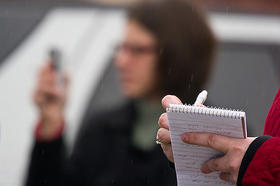 Illinois representatives are debating how much freedom high school journalists should have to criticize their school district's administration.  But state educators and local school districts say they worry about being held responsible for what their schools publish.

Representative Will Guzzardi,  a Democrat from Chicago, told a House committee the measure would let students decide what to publish unless a school advisor says the content violates certain standards.

"Any student speech would incite students to disrupt school activity would not be allowed under Tinker. So we're not allowing for dangerous speech. We are allowing for critical speech," Guzzardi said.

Hope Johnson is a senior and the editor-in-chief of the yearbook at Taylorville High School. She told members of the House she knows what is and what is not acceptable to publish.

"Although we are young, we are taught responsible journalism," she said. "We hold ourselves accountable for each and every story that we write. This bill ensures that journalism ethics are maintained."

But critics, including education groups said state law should continue to allow them to edit student content  to prevent putting out inappropriate material.

They said they're concerned about students publishing attacks on other students and teachers.

The committee approved the measure, but members said they want to see changes to the proposal before it's debated by the full House.

Illinois lawmakers are moving to make it easier for transgender individuals to change the gender marker on a fundamental document: their birth certificates. Democrats on a House committee approved the legislation Tuesday on a partisan vote of 8 to 6.

Alexandria Dinardo, who was born and raised in Springfield, was born male; that's what Dinardo's birth certificate still says.

And Then There Were None: Governor, Leaders Haven't Met At All In 2016

By the end of next week, Illinois will have gone a full nine months without a budget. And yet, the state's top politicians still aren't talking. The governor and the four legislative leaders went all of June through November without meeting, before finally getting together a couple of times just before the end of 2015. They didn't continue into the new year.