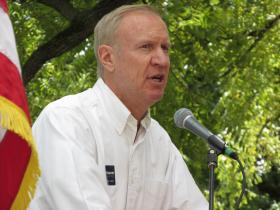 Republican investor Bruce Rauner will be the next governor of Illinois — probably. He declared victory over incumbent Gov. Pat Quinn and is up by five percentage points, but the Democrat is refusing to concede.

Listen
Listening...
/
Brian Mackey reports on the race for governor, and what's next for Illinois government.

Rauner made hundreds of millions of dollars as a private equity investor. Lately, though, he’s been investing in himself — spending $27 million of his vast fortune on a quest to become governor of Illinois.

He outspent Quinn by more than two-to-one, and in so doing made this by far the most expensive campaign in Illinois history. But, speaking to supporters at a Chicago hotel Tuesday night, he seemed to think it was worth it.

His victory was no sure thing. Across the country, 2014 was a Republican year. But Illinois is still a blue state. And Quinn has beaten the odds before, barely winning a full term the year after Rod Blagojevich’s impeachment elevated him to the top job.

After months of public appearances, thousands of blistering attack ads, and polls that had the race in a dead heat — Rauner appears to have defeated Quinn by five percentage points, 51 to 46. Despite Rauner’s win, Illinois is still in many ways a Democratic state.

"The voters have spoken," Rauner said. "The voters have asked for divided government. For the first time in many years, we’ll have a Republican governor and a Democratic legislature."

During the campaign, Rauner liked to talk about about the “trio of terrible government,” lumping together Blagojevich, Quinn and House Speaker Michael Madigan. But on election night he was singing a new tune.

“Just a few minutes ago ... I called Speaker Madigan. (boos) I called President Cullerton. (more boos) And I said, ‘This is an opportunity for us to work together,’ " Rauner said.

Rauner will need the cooperation of the Democratic leaders if he hopes to get anything done. On that front, just what his agenda consists of is a bit of a mystery.

Will Rauner seek to weaken government employee unions, like he talked about in the Republican primary? Will he focus on economic issues like in the general election?

He seems to be pivoting again, talking about the need to make Illinois a state that is competitive — and compassionate.

“We can judge our state, we can judge our nation, by how well we care for our most vulnerable citizens," Rauner said. "That is a good way to judge the quality of our life and our families."

Kent Redfield, a political scientist who’s long observed state government from the University of Illinois Springfield, says this is a new message.

“I think if you went back and looked at the commercials, there’s an awful lot about shaking up Springfield and all the things that were going wrong, but we didn’t hear a lot of compassion," Redfield says.

He says there’s a reason Rauner’s speech was moderate.

“The reality is that he’s dealing with huge majorities," Redfield says. Majority Democrats will probably have to cut spending, and reluctant Republicans will have to find more revenue.

“The speaker and the Senate president are going to demand that there be Republican votes on those roll calls to raise taxes," Redfield says. "So it’s going to be a fascinating legislative session."

If you ask Gov. Quinn, we are getting ahead of ourselves. Yes, the Associated Press, NPR, NBC, and other outlets have all declared Rauner the winner. But Quinn is refusing to concede.

“I don’t believe in throwing in the towel if that many votes are being counted," Quinn said.

He spoke for less than three minutes, and said it could take days to count the outstanding ballots.

“We will never, ever yield to a result until all the votes are in," Quinn said.

Even if he does lose, as seems inevitable, Quinn is not out of power yet. There are still veto and lame duck sessions of the legislature before Rauner would take office in January.