Gov. Bruce Rauner and his Democratic challenger J.B. Pritzker were minutes away from crossing paths Wednesday in Normal as they asked a tent full of farmers for their support.

Rauner and Pritzker made separate back-to-back appearances at a candidate forum hosted by the Illinois Agricultural Legislative Roundtable at Rader Farms.

Pritzker criticized Rauner, a first-term Republican, for not being more vocal about the harm being done to farmers by the Trump administration’s trade policies. Those policies have led to costly retaliatory tariffs that have hit farmers especially hard, plus uncertainty over renegotiation of the North American Free Trade Agreement (NAFTA). 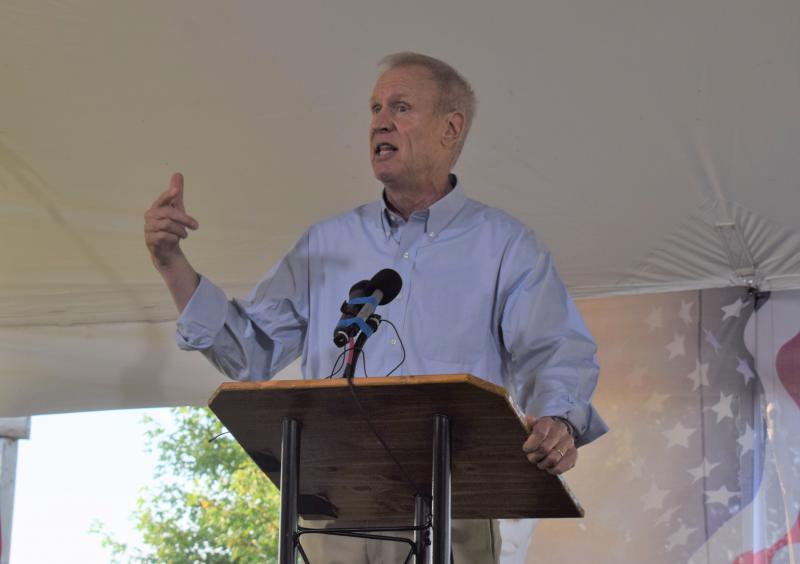 Rauner applauded the federal tax cuts passed in December and the Trump administration’s attempts to fix “unfair trade deals” that he says take advantage of the U.S. He said he has applied some pressure on the White House and Illinois’ congressional delegation.

“Tariff wars—dramatic increases in certain tariffs—can be devastating. We can lose more jobs in Illinois. Farm families can be harmed. I’ve been talking (with federal officials) about the risks of that and the ways to handle that to make it more productive,” Rauner told GLT.

Rauner criticized Pritzker’s push for a progressive income tax, which would replace Illinois’ flat tax with a system of graduated tax brackets. Pritzker said that new system would force wealthy Illinoisans to pay more in taxes, while lowering property taxes and income taxes for middle-income earners.

“Anybody who tells you that the right policy answer for the state of Illinois is to raise the income tax and put in a big graduated income tax, let me tell you something—disaster. Not the answer. Total ticket for trouble,” Rauner said. “Business owners will flood out of this state.”

During a Q&A with reporters, Pritzker did not answer a question about whether he would flesh out his tax plan with specific rates and brackets before the election.

“I’ve been clear about what the principles are for a fair tax system,” Pritzker told GLT. “First of all, we need to ask people like Bruce Rauner and me to pay a slightly higher rate. We need to make sure there’s a graduated system so people in the middle class and those who are striving to get there actually get a tax break. He likes to say that other states aren’t creating jobs with a fair tax system. Tell that to New York and California and Minnesota. They’ve created lots of jobs.”

At what income level will people’s taxes go up?

“You’ve gotta negotiate this with the legislature—Republicans and Democrats,” he said. “We have to come up with a rate schedule that doesn’t penalize people who are striving to get to the middle class, cause they’re paying, frankly, the highest rates in taxes in general.”

Rauner asked Illinois Agricultural Legislative Roundtable, including many officials with the Illinois Farm Bureau, for a second term.

“I’ve lived in Illinois for 62 years, my entire life. I don’t know of a more important election in my lifetime than this election. Everything is on the line,” Rauner said.

Pritzker said Rauner hasn’t delivered for Illinois farmers, including during the two-year budget standoff. He cited the 2017 closure of the Department of Agriculture’s Galesburg Animal Disease Laboratory, at the time the state’s only animal-disease testing lab.

WGLT depends on financial support from users to bring you stories and interviews like this one. As someone who values experienced, knowledgeable, and award-winning journalists covering meaningful stories in central Illinois, please consider making a contribution.

Illinois police officers who want to seek mental health care can now do so without jeopardizing their jobs.

Illinois Democrats are trying to put Gov. Bruce Rauner on the spot over equal pay for women.

They’re pushing him to sign legislation that would prohibit employers from asking job applicants about salary history.

After 13 years of work, a consortium of 200 scientists from 20 countries has released the first complete genome sequence for wheat. The discovery sets the stage for advances in a staple crop at a time when rising temperatures are beginning to threaten global production.

Wind-Blown Pesticides An Issue In Courtrooms, Communities Across U.S.

Pesticides are all over, from backyard gardens to cornfields. While their use doesn’t appear to be slowing, concern over drift and the resulting effects on health is driving research — and more worries.

Those concerns are bringing pesticides to a different venue: courtrooms.