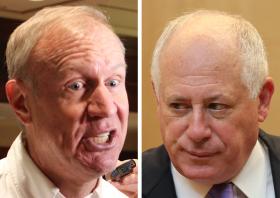 The election returns in yesterday’s Illinois primary were not even in before the candidates for governor started attacking each other. Republicans chose wealthy investor Bruce Rauner to take on Democratic incumbent Pat Quinn. Brian Mackey looks at the surprisingly close election results, and what’s ahead for the campaign.

Listen
Listening...
/
Brian Mackey looks at the road ahead in the campaign for Illinois governor.

Rauner spent millions more dollars than all his rivals combined, and had huge leads in the polls. But in the end, he only won by three percentage points. Of course, a victory is still a victory.

Rauner, who became a very wealthy man buying and selling companies, is a newcomer to politics. But he bested three men with long careers in government by hammering both Democrats and Republicans.

RAUNER: “This is about shaking up Springfield, ripping the corruption out by its roots, by getting term limits on everybody in Springfield.”

He was able to win by spending millions of dollars — including more than $6 million of his own vast fortune — to dominate television advertising.

That money was clearly an asset in the primary, and will no doubt continue to be useful in the general election. But his opponent is already starting to use it against him.

QUINN: “And I’m here today to fight for an economy that works for everyone. Not just for the billionaires, but for everyone.”

It’s worth noting that, at least among Democrats who bothered voting in the primary, the incumbent lost 28 percent of the vote to an unknown, barely-funded anti-violence activist named Tio Hardiman.

But again, a win is a win, and now Quinn will focus squarely on Rauner.

Call it the Mitt Romney strategy. Quinn wants to paint Rauner’s wealth as putting him out of touch with the concerns of everyday people. And it’s not just rhetoric — you’re going to hear a lot from Quinn and other Democrats about one legislative proposal in particular, meant to make Rauner and other Republicans look bad.

QUINN: “In the Democratic Party, and all across Illinois, we respect our workers. We understand that there are some who do the hardest jobs in our society, and that’s why we intend to raise the minimum wage in Illinois this year.”

Quinn wants it up to at least $10 an hour. He even had a campaign ad on the subject airing as soon as the polls closed, before Rauner had even won. The commercial tries to use Rauner’s own words against him.

For his part, Rauner has already been attacking Quinn for months. That looks like it’ll only intensify.

But he’s also pivoting to the center, in what looks to be an attempt to appeal to Illinois voters who haven’t elected a Republican governor since the 1990s.

That’s Republican enough. But here comes the pivot to the left.

RAUNER: "He’s shredded our social-services safety net. And he’s defunded our schools, while thousands of school children are trapped in failing schools.”

Rauner might be contradicting himself ideologically, but his statement is accurate. Quinn has raised taxes, and because money is still tight, he’s had to cut spending, too.

This “angering both sides” approach could continue next week when Quinn delivers his budget plan to the General Assembly. That tax increase is scheduled to start rolling back midway through the next budget year, which would require cutting another billion dollars in spending.

That’s among the many big issues that ought to be debated heading into the general election in November, but it remains to be seen whether that'll actually happen.

Quinn and Rauner are two of the most relentlessly disciplined, on-message politicians in Illinois. They rarely deviate from their talking points. And for voters who’ll be sitting through millions more dollars in campaign advertising, that could make for a very long eight months.

Rauner vs Quinn for Illinois Governor

Venture capitalist Bruce Rauner has been declared winner of the Republican primary for Illinois governor.

Allegations Against Candidate for Illinois Governor

A man who says he was a victim of sexual harassment by Illinois Treasurer Dan Rutherford has submitted a letter of resignation.

The four men competing for the Republican nomination for Illinois governor met in Peoria Thursday night for a live debate broadcast on public radio and television stations across the state.