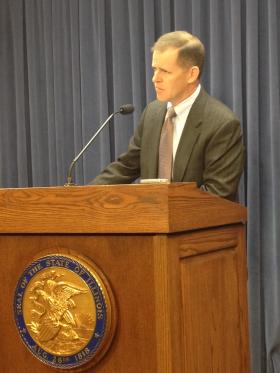 The Republican candidate for Illinois Attorney General is criticizing incumbent Lisa Madigan for defending the state's pension overhaul law, which he thinks is unconstitutional.

A clause in the state's constitution says that once earned, pension benefits shall not be diminished.

The pension law, passed last year, law reduces cost of living benefits paid out to state employees and public school teachers. That, and other changes, haven't actually taken effect yet; a lawsuit challenging the law is ongoing.

Republican Paul Schimpf says his opponent, Madigan, is too entrenched in Democratic politics to enforce the constitution in the pension case. She's the daughter of House Speaker Michael Madigan, who sponsored the pension overhaul.

"Lisa Madigan, my opponent does have a conflict of interest and it's not because she's a good or a bad person, it's just because human nature, you're going to be loyal to your family," he said.

Schimpf says the other parts of the pension law, like raising the retirement age, might be constitutional, if those provisions were separated out from the reduction of the cost of living benefits.

But he won't say where he lands on fellow Republican Bruce Rauner's plan for the system.

Schimpf says he supports gubernatorial candidate Rauner, but he didn't want to comment directly on Rauner's plan to replace existing pensions for state workers with a 401-K-style arrangement.

When pressed, Schimpf said any change the state made to the payments promised to retired teachers and state workers might not meet constitutional muster.

"I don't think it would comply with the Illinois constitution if somebody had significant reliance on promises the state made, and then the state didn't comply with those promises," he said.