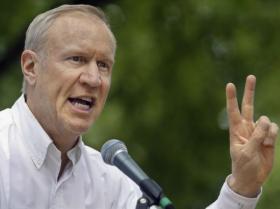 Bruce Rauner -- the Republican nominee for Illinois governor -- says he followed the letter of the law when filing his taxes.  But he won't say whether it was fair.

Rauner, a businessman, has said his wealth puts him in the top .01%.

Even so, a Chicago Tribune analysis showed that in several recent years, he paid no Social Security or Medicare taxes.

Rauner has released limited parts of his tax returns.

It's believed he took advantage of I-R-S rules to legally cut his tax burden.

RAUNER "We honor all the rules, all the regulations, all the tax laws. We follow the tax code. We pay all the taxes that are owed."

Rauner adds that he's given tens of millions of dollars to charitable causes.

But when asked if that's fair, if he SHOULD be taxed at the same rate as someone who's middle class, he turned things back on his opponent, Gov. Pat Quinn.

REPORTER: "No the issue is should you, should someone like you?

RAUNER: "We can talk about should we reform our tax code, and we'll be doing that in the future. Here's the issue. This is a political stunt by Gov. Quinn to divert attention from the investigations going on in his administration."

Quinn has been pushing hard to make Rauner's wealth into a campaign issue.

Governor Pat Quinn and his Republican challenger, Bruce Rauner, disagree about plenty -- everything from gun rights and restrictions, to what Illinois' income tax should be. But with Friday's ruling by a Cook County judge knocking a term limits initiative off the ballot, the candidates have something in common.

Though there has been a lot of turnover in the General Assembly in recent years, some politicians have been serving in Springfield for decades.

Chief among them House Speaker Michael Madigan, who has been a state representative since 1971.

No Vote On Illinois Term Limits

Cook County Circuit Court Judge Mary Mikva has ruled the question is unconstitutional for voters to take up.

Republican candidate for governor Bruce Rauner has unveiled what he says is phase three of his plans to "Restore Illinois." It's focused on how the state taxes businesses.

In a statement — he released the plan via social media, rather than at a live event — Rauner says he wants to close "special interest loopholes."

And, in a risky move as he seeks to win newspaper editorial boards' endorsements, he wants Illinois to begin taxing newsprint.

Republican candidate for governor Bruce Rauner is wading deeper into the debate over whether Illinois ought to extend a higher income tax rate. He's still refusing to say how he would manage the state budget.

The Rauner campaign says it's making robo-calls to voters in seven House districts. These are key Democrats in the budget debate — most have previously taken positions against the higher tax rate.