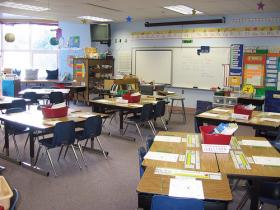 The Illinois Senate has passed a plan to overhaul the way schools are funded. But the proposal has a long way to go before becoming law.

Listen
Listening...
/
As Hannah Meisel reports, a plan to overhaul how schools are funded in Illinois passed the Illinois Senate, but has a long way to go before becoming law.

After months of negotiations and with just four days left on the General Assembly's spring calendar, the measure was deemed "ready for primetime." The plan would direct state funding to more impoverished schools and divert funding from schools in wealthier areas.

Supporters of the plan, like Sen. Mike Noland (D-Elgin) say this would help remedy inequity in school funding.

"Gangs, crime, poverty. These are all systemic and endemic of an underfunded and inadequately funded education system in the state of Illinois," he said.

But opponents say the redirection of state support isn't fair to schools that will receive less.

"For those of you who represent suburbs, understand: They're taking it from your property taxpayers and they're going to be asking you, 'What did you do to defend us?'" said Sen. Matt Murphy (R-Palatine). Sen. Dale Righter (R-Mattoon) says he cannot vote to create "losers" even if his area would benefit from the change.

Righter also says he's wary of a provision in the legislation that would eliminate the guaranteed "foundation level" students in Illinois need for a proper education. That foundation level is $6,119, but has been prorated for the past few years; this year it's at 89 percent of the full figure.

The measure's sponsor, Sen. Andy Manar (D-Bunker Hill) says his plan would get rid of proration, so the foundation level would become a non-issue. He also says he doesn't understand why Republicans are concerned with education funding when only a few years ago, they referred to growth in poverty grants for education funding as "unsustainable."

Manar concedes that the plan will not win approval of the Illinois House before the legislature adjourns at the end of the week. He says the overhaul still needs more work and will use the summer to consult with more education experts and lawmakers. Manar says the school funding formula is too complicated to be pushed through the General Assembly on a time crunch.

"As you begin to peel layers back on how we distribute funds and all of the things and the criteria that go into this issue, it's no wonder it hasn't changed in 17 years," he said.

With less than a week remaining in the Illinois General Assembly's spring session, advocates are still working to double the state's tax credit for the working poor.

Advocates say the Earned Income Tax Credit is more effective at lifting people out of poverty than welfare or raising the minimum wage.

More than 900,000 Illinois workers receive the state's version of the EITC, which is currently worth 10 percent of the federal version of the credit.

Students in Illinois will now receive training on a potentially lifesaving device as part of their high school education. One superintendent says it’s the latest in a long line of unfunded mandates.

Quinn has been clear about the potential consequences of letting Illinois' income tax rate drop, as it's scheduled to do at the end of the year.

The Keokuk School Board has approved the district’s certified budget for the upcoming school year.