Session Ends, With No Illinois Budget 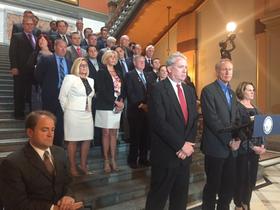 Illinois' budget crisis will continue, unabated. The regular, spring session came to an end Tuesday night, without any resolution to the stalemate that has the state entering its twelfth month without a complete spending plan. There's no plan for next year, either.

Lawmakers spent morning, to midnight at the capitol passing dozens of bills, and sending them on to the governor, who'll potentially sign them into law.

None of them were budget bills.

Which means school will have to keep wondering if the state will send money to help them open their doors on time; community colleges and universities like Eastern, Western and Chicago State will have to keep confronting hard choices about their future; and organizations that rely on state money to support at-risk youth, sexual assault victims, and the elderly will have to keep cutting back.

And they'll all keep hoping for a breakthrough.

Though the stalemate has dragged on, there's a shot the summer could bring about a mini breakthrough.

Tuesday morning, when Gov. Bruce Rauner and the legislative leaders met briefly in private he pitched a stopgap budget.

And one Democrats were open to getting on board with because, they say, it's not tied to passage of his controversial Turnaround Agenda.

It was a turnaround of its own: Rauner had dismissed the concept days earlier when it was floated, by Senate President John Cullerton.

"We had a very good meeting with the governor today, he started off by complimenting me, which I thought was very nice. He said that I was prescient because I'd suggested that we talk about an interim budget, that would keep the government running, keep the schools open, keep the univeristies open, keep the social service providers from closing," Cullerton said. Problem was, Democrats say, the offer came too late.

Democrats often use their control of the legislature to bend the rules in their favor, but to push through a brand, spanking new plan in a single day -- on the final day of the session -- was impossible.

Instead, Cullerton and House Speaker Michael Madigan say they'd assign a small group of legislators negotiating on larger budget questions, to study it.

The Republican Leaders framed it as another example of Democrats stalling, and trying to, they say "force a crisis." "I think we are on the brink of a shutdown ... I mean literally there are operational needs for government that need to be addressed," Senate Minority Leader Christine Radogno said.

Specifically, says House Minoirty Leader Jim Durkin: "Because there is going to be a crisis within the Il Dept. of Corrections this summer becuase they will not be able to pay the locals for utilities, and also be able to privde food ... inside those institutions. That's not conjecture. That's reality. That's going to happen this summer. This is how was fix it."

Last week, Madigan muscled a budget through the House, widely viewed as unbalanced.

Still -- given that there are even MORE Democrats in the Senate than in the House, it would seem an easy thing for the Senate to pass. Instead, when the Senate took it up late Tuesday night it got 17 yes votes to 31 voting no.

The House followed up with its own lopsided vote shortly after. Senate Democrats had passed over a budget bill that only covers spending on schools; it aimed to give education a big boost. As if to deliver comeuppance, many Democratic representatives voted no -- making for another slanted result.

Noting that even if the chambers had been in agreement, it wouldn't have mattered. Gov. Rauner had threatened to veto the big budget plan, anyway.

Rauner didn't even wait for all of that to play out to lash out at Democrats. At five o'clock -- a full seven hours before the legislature was done for the night -- Rauner held a press conference to call the legislative session a "stunning failure."

With Republican legislators lined up on the capitol's grand marble staircase behind him, he made another pitch for a stopgap budget ... and for action on his pro-business, union-weakening platform.

When asked ... Rauner said he too bears responsibility for the unprecedented situation Illinois is in now.

"Absolutely" he said, before going on to say, "the Democrats have spent our state into the toilet for 30 years. We're like a banana republic."

"You know, I don't see the advantage in criticizing someone you want to sit down with and negotiate with," he said. "It's kinda like, you know, starting a fight ... insulting your wife before you negotiate with your wife over something that's important. You know, 'I don't like your mother in law'. That's not the way you start off with a negotiation."

But that is just how this round of budget negotiations are starting; immediate meetings are scheduled on a temporary plan, and the House is scheduled to be back in session every Wednesday, beginning next week.

Illinois May Be Set To Repeat Budget-Less Year

Illinois could be heading into a second year without a budget. Lawmakers are beginning their final day of the regularly-scheduled spring session without a deal.

A measure that would legalize fantasy sports in Illinois is dead for the remainder of the spring legislative session.

Rauner Would Veto House Budget Plan ... All Of It. (So Prepare For Summer Session)

Lawmakers only have two days to pass a budget before a pending deadline. But even as top leaders came out of a meeting Sunday, saying that a deal is possible, it was clear the chances are woefully slim.

Gov. Bruce Rauner has danced around it before. But this time, he didn't flinch.

Rauner says if it gets to his desk, he will reject in its entirety the only spending plan currently alive in the statehouse: a plan House Democrats approved last week.