A would-be state holiday passed last week without notice in Illinois. But supporters are hoping it will be recognized in the future. 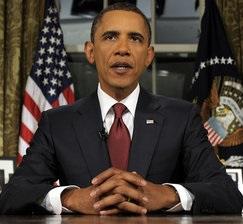 But back in his adopted home state, the day came and went with little recognition, to the disappointment of State Rep. André Thapedi, a Chicago Democrat. He's proposed making Aug. 4 a state holiday.

Thapedi says that, as the nation's first black president and a Nobel Laureate, Obama also is deserving.

"In my view and a lot of my colleagues' view, those distinctions in and of themselves are more than enough reasons to honor him in Illinois," Thapedi said.

But an estimate by Republican Gov. Bruce Rauner's budget office says it'd cost Illinois $3.2 million to give state workers the day off, and the government would lose $16 million in their lost productivity.

Thapedi's suspects those numbers are inflated, but he says he laid off on the plan, given the state's pressing budget issues.

Thapedi says once the state's fiscal house is in order, he'll try again.

Will Obama's Belief In Politics Of "Hope" Spur Action In Illinois?

On a freezing February day in 2007, President Barack Obama announced his bid for the nation's highest office in front of the Old State Capitol in downtown Springfield -- the place where Abraham Lincoln gave his historic "House Divided" speech. At the time, Obama called for hope and change.

Nine years later -- to the very day -- Obama came back to Springfield. In his last year as president, he says he believes in the "politics of hope."

President Barack Obama addressed a joint session of the Illinois General Assembly Wednesday. As expected, he talked about improving American politics. What follows is Illinois Public Radio's broadcast of the full speech, hosted by Niala Boodhoo with reporting and analysis from IPR's Amanda Vinicky and Brian Mackey, and former state Sen. Rick Winkel, who's with the University of Illinois' Institute of Government and Public Affairs. There's also video of the speech and a transcript provided by the White House press office.

As the president prepares to visit the state capitol and speak to lawmakers, some in Illinois are wanting to designate a holiday in his honor.