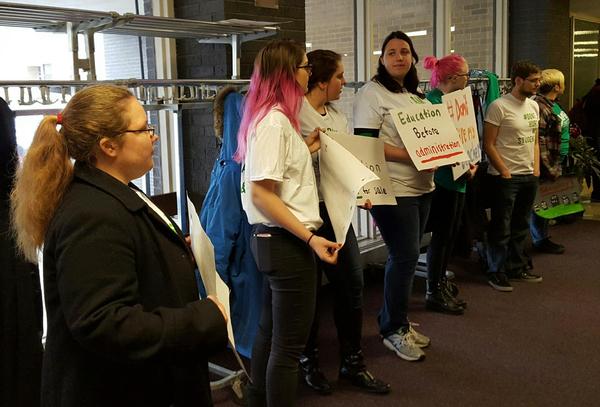 And not just because the House failed to override a veto of legislation that would have allowed at least SOME funding for the first time in eight months.

Legislators spent most of yesterday debating how to pay for Illinois' colleges and universities --- with nothing material to show for it by the time they'd adjourned.

Then, once the Capitol cleared out, an evening email from House Speaker Michael Madigan's spokesman, Steve Brown announcing a "new compromise effort."

So Brown says Democrats got on board with a concept Republicans have endorsed.  It relies on an accounting contrivance, with the net effect of funding higher ed by diverting money meant for other needs.

But it does more, too: it includes money for a range of social service programs.

To Republicans, it's no olive branch --- it's a Trojan horse.

The Illinois House has failed to override Gov. Bruce Rauner's veto of funding for college grants and two-year schools.

The House debated restoring hundreds of millions of dollars in college funding for two hours Wednesday afternoon. But overcoming Republican Rauner's rejection of the spending required 71 votes. It failed 69-48.

The legislation involved $397 million for the income-based Monetary Award Program and $324 million for community colleges.

All of Chicago State University’s 900 employees are on notice – they’ll lose their jobs if the governor and lawmakers don’t come through with cash.