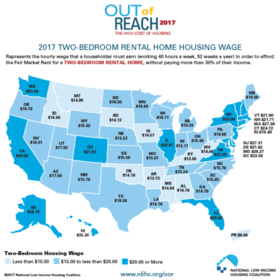 A new study finds minimum wage fails to pay the rent in Illinois.

Rental housing costs vary across the state, but there is no place where it's affordable to someone earning minimum wage.   In order to avoid paying 30% or more of income on housing, on average a household must earn at least $43, 406 annually.  That translates into a wage of $20.87 an hour, well ahead the $8.25 an hour that is Illinois' minimum wage.

Bob Palmer, Policy Director for Housing Action Illinois, says the numbers show a problem that can lead to more homelessness.

"But for most people, what they do is they just wind up spending a high percentage of their income on rent.  If you're an extremely low income household, chances are you're probably paying in excess of 50 percent of your income just to keep a roof over your head," he said.

Palmer says a tight rental market following the foreclosure crisis is making the situation worse as costs are going up.  Even in rural areas, what's known as the housing wage on average is over $12.50 an hour.  It's nearly double that in the Chicago area.

Palmer's group is pushing for a minimum wage increase to $15 an hour over the next five years.  Lawmakers approved that plan this spring, but it's unclear if the governor will go along.

Palmer said proposed cuts to rental assistance programs outlined in the President's proposed budget would add to the problem.

Illinois is not alone when it comes to low wage workers having trouble making rent payments.  Palmer says in no state can a minimum wage earner afford the average of a one bedroom unit on a 40 hour a week schedule.