Suicide A Driver Of Gun Deaths In Rural America

The national conversation around gun violence generally centers around mass shootings, school shootings and gang activity. These problems need to be addressed, but may overshadow the largest group affected: suicide victims.

The majority of suicides are carried out with guns. And the rate of suicide has been steadily increasing for years.

“We knew this was a problem,” said Steve Sanetti, President and CEO of the National Shooting Sports Foundation. “But we didn’t know what to do.”

Sanetti said he knew the NSSF -- a massive firearm industry trade association -- didn’t have the psychological know-how to address the problem alone. So over the last two years, they’ve worked with the American Foundation for Suicide Prevention to create prevention kits that are now heading out to thousands of retailers, gun ranges and AFSP chapters around the country.

The free kit materials are already online, and include window decals and suggestions about how to handle different situations. Situations like how to ask a friend to hold onto his or her firearms until a truly dark moment passes and they’re no longer trapped in a cycle of constant suicidal thoughts.

And this moment can pass, especially with help, according to Doreen Marshall, the Vice President of Programs at the AFSP.

“So anything that can buy some time for the person to get help, for the person to be connected to some support. And unfortunately firearms, because of their high lethality, do not offer that for us. Often, if someone attempts with a firearm, that first attempt is fatal,” she said. 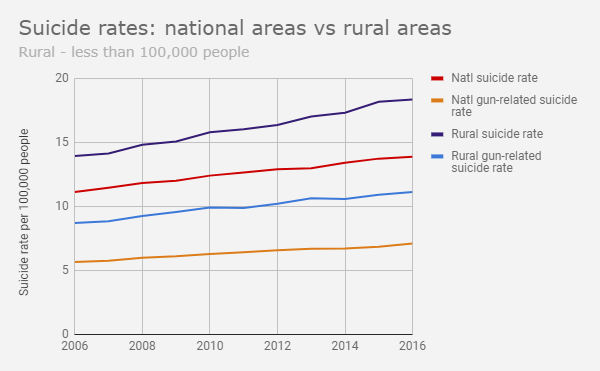 Kit materials through AFSP and NSSA promote having a “brave conversation” that includes talking directly about worries or thoughts of suicide.

“Because what we know is you’re not going to put the thought in someone’s head if they’re not thinking about it, but that often people feel relieved that someone is noticing the amount of distress they’re in,” Marshall said.

Marshall says firearm suicides are one of four major areas her organization is working on through Project 2025. That project aims to reduce suicide by 20 percent from 2015 to 2025. Beyond firearms, it focuses on reducing suicides in the corrections system and after visits to large healthcare systems or emergency departments. However, she doesn’t think AFSP is alone in this.

“While this is a project where we’ve coined the name and all of that, it’s really not one our organization is going to (accomplish) alone,” she said.

The CDC collects suicide statistics, but the latest data is from 2016 and still shows suicide rates inching upwards. But Marshall has hope. She says suicide is being studied both by AFSP and others more than ever before as its own condition.

“I think what you’re seeing more of in recent years is treatments coming out that are focused specifically on reducing suicide risk versus reducing levels of depression and hoping someone’s suicidality goes away.” 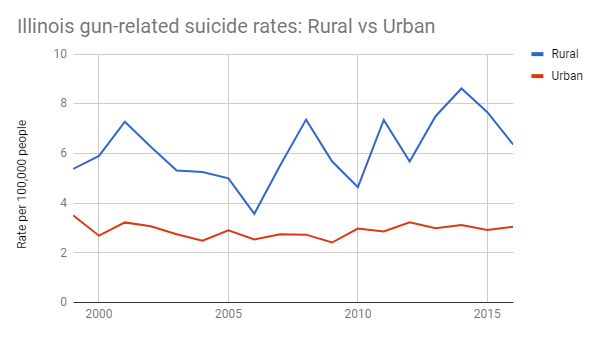 AFSP studies suicide data and has tools to help people in distress and family members of people who already died.

“They have some really, really good resources on there and I’ve read a lot of those articles and that led me to finding local, in-person support groups,” Martinez said of AFSP. “So there are two in my area, and I went to my first one 10 days after Ben died.” 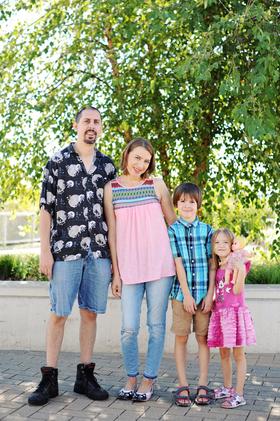 Her brother, Robert Benjamin Bloom, or Ben, was 37 when he killed himself with a firearm in Germantown, IL. Martinez described her brother as adventurous, independent and caring.

“I think that he took on a lot of people’s problems, and he was, you know, someone who thought of himself as a problem solver,” she said.

She said they grew up near Washington, IL, but Bloom ventured out to live in Chicago, Wisconsin and Colorado.

“He was more adventurous, I guess, then I am,” she said. “On a whim, on the year 2000, he went to Times Square. Just drove there with friends just to do it as an unplanned thing. That was very characteristic of his personality. To just have an idea and go and do a thing that was fun and exciting.”

He did try to get help in rural Colorado, where he was living as a miner, but in-person help was often an hour away and Bloom didn’t think it was helping. So he returned home to Illinois, telling his sister he wanted to give up. She tried to get him help anyway, but he wouldn’t take it.

“I think he was used to figuring out a way out of a problem, and I think that this wasn’t a problem that he could see a way out of except for this,” she said. “And I don’t think that he really thought that he would get better with mental health help. I guess I disagree with that.”

The mentality of independent, older men working in rural areas may contribute to this suicide problem.

And for farmers, the economy has been down for the last few years.

Matt Perdue, a National Farmers Union spokesman, says there are non-profits and state organizations trying to help farmers in distress. However, he says they’ve told the Farmers Union “that demand is at an all-time high. That they’re hearing from farmers and ranchers more than they have since probably the 1980’s farm crisis and that they just do not have the funding they need to provide the services that these farmers and ranchers need.”

He noted that 60 percent of rural America faces a shortage of mental health resources. At the same time, these areas have the highest rate of gun ownership.

To help combat rural suicides, Perdue is advocating for two bills: The STRESS Act in the House and the FARMERS FIRST Act in the Senate. Though they are different in scope, both bills would fund things like support groups and community education on rural suicide.

The acts are designed to be in the Farm Bill, which is a legislation passed once every five years to fund far-ranging farm and nutrition-related programs. However, they likely face an uphill battle against some House Republicans who argue subsidies for farmer programs are already too high.

Marshall says her organization is not only working on research, but on educating mental health professionals and reaching out to communities.

“If you educate the public, what you start to realize is that you have people who are closer than a clinician will ever be to the person at risk that can help intervene,” she said.

The American Foundation for Suicide Prevention has chapters in every state and compiles research and resources on its website is afsp.org.

This story was updated 6/27/2018 to remove references to a 2016 CDC study. A New Food Economy analysis raises doubts about the study's claims and on previous reporting of the study.

NEXT: Reclaiming Their Neighborhood

Illinois Newsroom is a regional journalism collaboration focused on expanding coverage of education, state politics, health, and the environment. The collaborative includes Illinois Public Media in Urbana, NPR Illinois in Springfield, WSIU in Carbondale, WVIK in the Quad Cities, Tri States Public Radio in Macomb, Harvest Public Media and the Midwest Center for Investigative Reporting. Funding comes from the stations and grants from the Corporation for Public Broadcasting (CPB) and McCormick Foundation.

His name was Devon McClyde, and he was 16 years old when he was caught in the crossfire of an argument while playing basketball one evening in a local park in Danville on June 8, 2016.

He died three days later – the victim of another gun crime in Central Illinois.

Emerging from the Darkness

On Monday night, I walked my dog along one of our normal routes. It was unseasonably warm and windy. The sunset was the autumnal colors of changing maple leaves. It had been a long day—a day where, from the moment my alarm went off, I felt I should get an award for just getting out of bed and putting on pants.

Labyrinth in Macomb Designed to Give Hope

A crowd of people gathered at the Lakeview Nature Center in Macomb to create a labyrinth in the prairie grasses to help spread suicide awareness and prevention.

Everyone involved in the project had a personal connection to suicide as some had lost a loved one while others have struggled with suicide themselves.

An alarming number of farmers in the U.S. take their own lives, according to the magazine Newsweek.