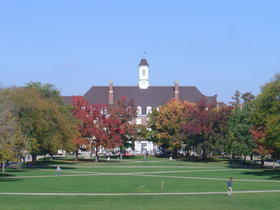 Higher education will see a funding cut next year, but Democrats want to lessen the impact compared to what the Republican governor called for.

Republicans voted against the Democrats' measure in committee. GOP Rep. Mark Batinick from Plainfield says the cost of doing business in Illinois is too high. That includes the business of higher education.

"The reality is, versus other states, we actually dramatically overfund education--higher education--yet we're not seeing it in the tuition for the students," Batinick said.

Despite the cuts, Democrats propose an increase for MAP grants, which make college more affordable for low-income students.

Democratic Representative Christian Mitchell from Chicago says this will help get rid of the barrier of access for some students.

"So that kids who qualify and are able to get into college have the money to go so that they can be productive citizens and, you know, create the next great innovations that might, you know, move all of us forward," Mitchell said. "So I think that what we're doing is saying here are our priorities, here are the things we care about, we'd love to meet you in the middle."

The sponsor of the proposal says the increase could help up to 15,000 more students than last year, but uncertainty remains. Democrats' budget package spends more than the state is set to take in next year.

Statehouse Impasse Even As Budget Progresses

Illinois Democrats have begun to unveil their new state spending plan, which looks a lot like the current one. That's despite Illinois having billions of dollars less, thanks to a rollback of the income tax rate in January. Even before the details were made public, Gov. Bruce Rauner's office was out with a statement tearing into the proposal, and its architect, House Speaker Michael Madigan.

This Way To Exit: Budget, Or Turnaround

By the end of this month, Illinois legislators are slated to be done with their work. That means passing a new budget. Amanda Vinicky checks in with how that's progressing -- including in the eyes of the state's new governor.

Western Illinois University's Center for Performing Arts might have to do without some amenities as the school aims to reduce the cost of the project.  The single construction bid that came in this spring was over budget. So the state ordered Western to scale back the building plans by about $6 million, which is about 10% of the total cost.

Funding for higher education fell slightly along with the drop in Illinois’ income tax rate at the beginning of the year.

Presidents of three public universities appeared before lawmakers to make their case on why their schools shouldn’t have to endure a 31% state funding cut, as Republican Governor Bruce Rauner has proposed.