What's Next For Pensions, Now That Court Has Tossed Illinois' Law? 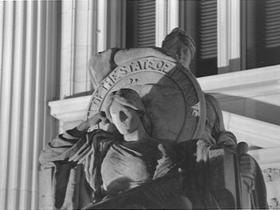 It took legislators years of talking about Illinois' pension problem before they did much about it. There was a 2011 law that affects state employees, university professors, and public school teachers hired after that time. Then in 2013 they passed a law that reduced current workers' and retirees' benefits. Nearly immediately, workers and their unions sued, calling the law unconstitutional.  On Friday morning, Illinois' Supreme Court issued an unanimous opinion saying it agreed. But Illinois still has an extra one-hundred-billion-dollar weight atop the state's shoulders, which are already sagging from budget troubles. Which raises the question --- what's next? Amanda Vinicky lays out some potential options.

For a long time, when you asked a lawmaker about pensions, you got an answer like this one, from House Speaker Michael Madigan: "We'll all just wait to see what the seven justices do."

Madigan had sponsored the now-nullified pension law, which would have reduced retirees' cost-of-living payments, raised the minimum retirement age, and put a cap on how big a salary an employee can draw a pension on.

Now Madigan has his answer, and in no uncertain terms. The court opinion says the pension clause in Illinois' constitution "means precisely what it says" -- benefits cannot be diminished or impaired. It goes on to seemingly scold the legislature for trying -- saying the "General Assembly overstepped the scope of its legislative power." It blames the legislature for racking up such massive pension debt in the first place, saying "it is a crisis for which the General Assembly itself is largely responsible."

While Madigan may not have been pleased with what the justices had to say, he's not alone in having wanted an answer. Gov. Bruce Rauner, back in November (before his inauguration) had talked about anticipating a guidance from the high court, "so we have some ground rules, for what probably works and what won't work. I think that's the smarter way to do it." Lawmakers were looking for a clue. If not this, then what?

On Friday morning, a thrilled Anders Lindall wasn't willing to go there - he was in victory mode. Lindall's a spokesman for AFSCME, the state's largest public employees' union.

"I think that today is a day for looking at this decision and there'll be plenty of time to analyze its implications going forward," Lindall said.

Now that there's been some time to read the 38 page opinion and to start analyzing, it's not hard to find passages in which the court drops hints.

The state had tried to argue it needed to use "police powers" to break its pension promise to workers because Illinois is in a fiscal emergency. In rejecting that argument, the court noted that even as the case was ongoing, lawmakers had allowed Illinois' income tax rate to slip. Gov. Rauner had campaigned on letting a 2011 income tax hike lapse, and at the start of this year - it did.

Democrats and social service groups that depend on state funding have already been calling for a tax hike. Those calls are sure to get louder given the pension ruling, even though Rauner, a Republican, has remained resistant.

Rauner has his own pension plan. "What we recommend is something fundamentally different - for all benefits earned, they are protected. They are never reduced," he says.

But Rauner says future benefits are fair game. Going forward, he wants to move employees into a different system where they'll earn lesser benefits (the Tier 2 system that was created for newer state employees. Critics say that plan already has its own set of problems because the benefits are so light, particularly as most workers and teachers in Illinois' public pension plans will get no Social Security).

Despite Rauner's conviction, there's no guarantee that'll hold up in court, and in fact the Supreme Court's opinion may suggest otherwise -- it says the pension constitutional protections "attach once an individual first embarks upon employment covered by a public retirement system, not when the employee ultimately retires."

Just in case, the governor wants to simultaneously amend the state constitution so that'd be legal. Just to be safe, he says, "so that we can be crystal clear. Because no matter what we change in the pensions, unless the pension goes up, somebody is going to sue. That's the nature of the process. And rather than spend years in court, we'd rather do a constitutional referendum and try to clarify ... that benefits earned should be protected. But the future is unknown and it can be higher or lower."

Even getting a constitutional referendum on the ballot is a high hurdle, let alone passing it (a fight which would galvanize the labor movement). It requires 3/5 of legislators to go along; even getting a simple majority to go along with the just-tossed pension overhaul was difficult.

Senate President John Cullerton says there's another problem with that route; The next election isn't until late next year, meaning Illinois would be left at a standstill.

Cullerton is committed to his own theory, which is known as "consideration."

"The point is, if you want to modify someone's pension contract, if you will, you have to do it by getting something that they otherwise wouldn't be entitled to," he says. As in -- it's okay to change the terms of a pension contract, if it's not the state doing it unilaterally. Give employees an option. Something to consider. Even if they won't like those choices.

"And all of your future pay raises are in the future and they're not guaranteed and they're not guaranteed to be part of your pension. You could trade that in exchange for reducing some of your other benefits. And so that's why it's a contract, that's why it's constitutional, and that's something that is an option that would start to save billions of dollars and not waste the two years that we've wasted waiting for this Supreme Court decision," Cullerton says, adding that making it part of contract negotiations is another option.

Cullerton had previously worked with unions, and they'd tentatively reached a deal on a similar "consideration" style proposal, but the House was never on board, and so Cullerton begrudgingly went along with the now defunct approach. Union leaders have expressed a willingness to work in good faith to try to reach a new agreement. Now, though, the court ruling may give them the upper hand. There's another dynamic to throw in the mix: AFSCME's contract is up this year, and has to be re-negotiated with the Rauner administration.

In a way,  Rauner has his own "consideration" option too. The governor has suggested giving workers a choice: if they forgo compounded cost-of-living bumps in the future, he'll give them an upfront, lump sum of cash they can invest in a 401(k) style plan. Details on how that'll work are scare, though, and it's such a new concept its viability is ambiguous. Illinois could always revisit an older concept, one that Republicans and suburban Democrats disdain but the General Assembly's two Democratic leaders embrace: what's known as a cost shift.

Right now, Illinois pays the employers' share not just for state government workers, but it also covers the pension tab for school districts outside of Chicago and public universities. Speaker Madigan and President Cullerton say Illinois could save money by essentially "shifting" that cost -- onto the schools.

"I intend to pursue the cost shift because I think we have a situation today where one person makes a spending decision and sends the bill to a second person to pay the bill and I think that's a bad policy but especially a bad policy for governments," Madigan said years ago.

However, many schools have their own budget problems, and Rauner proposes cutting higher education by about 30-percent, leaving unanswered a major question: How could schools manage to take on those extra costs?

Revisiting the Supreme Court opinion (2015 IL 118585) provides still another option. The same section where is says bringing it more revenue is an option, it says an alternative would have been to "adopt a new schedule for amortizing the unfunded liabilities."

It's an idea long advocated for by Ralph Martire of the Center for Tax and Budget Accountability. Loosely, it can be explained by saying that Illinois would treat its unfunded pension liability like someone taking advantage of low-interest rates to refinance the mortgage on a house. Spread out the payment cycle (a law passed in 1995 ramps up payments, so it's been expensive in recent years); to the certain consternation of actuaries, some have suggested lowering the target to 70 or 80-percent funding, making the funding goal more realistic. At a time to some politicians "borrowing" is a bad word, and with ratings agencies on guard, the re-financing concept thus far hasn't gotten much legislative attention. Which gets to why it's important to hone in on another passage in the Supreme Court opinion, and not for any particular legal reason.

Justice Lloyd Karmeier writes that the pension law was "in no sense a last resort. Rather, it was an expedient to break a political stalemate." Karmeier's opinion shuts the door on other tactics legislators may have tried as they attempt to get pension costs under control; each of the options that remain could result in new political stalemates that there's no expedient way to break.

The Illinois Supreme Court struck down legislation that tried to cut retirement benefits for thousands of state workers.  In a unanimous decision, the high court said lawmakers overstepped their power when they sought to cut pension benefits for state employees, university workers, and public school teachers.

Illinois is facing a budget hole in the billions, thanks to a rollback of the income tax. If the high court tosses out the pension law, there'll be more fiscal pressure.

Analysts like Moody's Ted Hampton say the rating won't likely drop further, even if the justices toss the law because the rating already presumes the law cannot be implemented.

Union members and state employees can expect another pension battle ahead, regardless of what the Illinois Supreme Court says about the the current law meant to stem the tide on pension expenses.

Republican Governor Bruce Rauner says he'll push forward with his pension fix no matter how the seven justices rule on the 2013 legislation that was passed and signed into law before being put on hold by litigation.