The call originally came from Illinois Supreme Court Justice Anne Burke, a Catholic herself. A Pennsylvania investigation recently accused about 300 priests of abusing more than 1,000 children.

Harold said a grand jury would reveal the scope of the abuse and any efforts to conceal the abuse, but more importantly provide recommendations to improve.

“One of the things that stood out to me in reading the Pennsylvania report was the list of legislative recommendations,” Harold said. “And I think that’s particularly instructive because in many cases the statute of limitations may have passed for certain crimes, but that doesn’t mean that it’s unimportant to share those stories”

“I don’t know, but I trust Justice Burke’s opinion because she actually served on an internal panel within the Catholic church, so she’s more informed on the details than I would (be),” Raoul said.

Raoul said he does believe the state needs to be cautious about giving the Catholic church authority to run its own internal investigation.

People like you value experienced, knowledgeable and award-winning journalism that covers meaningful stories in Bloomington-Normal. To support more stories and interviews like this one, please consider making a contribution. 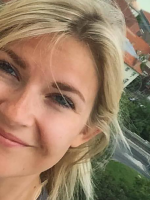 Mary Cullen
Mary works as an intern for NPR Illinois' Illinois Issues. She is currently a student in the Public Affairs Reporting master's degree program at the University of Illinois Springfield and will graduate in May 2018. Prior to coming to Springfield, Mary worked as the Editorial Intern at the Chicago Sun-Times. She obtained her bachelor's degree in journalism from Illinois State University where she served as the school newspaper's news editor and editorial writer. Mary is from Naperville, Ill., and attended Wheaton Warrenville South High School.
See stories by Mary Cullen

Mary Cullen
Mary Cullen is a reporter at GLT. Mary recently finished her master’s degree in public affairs reporting at the University of Illinois at Springfield. The Illinois State University alumna completed internships at NPR Illinois in Springfield and the Chicago Sun-Times.
Latest Stories