Event Will Recall The Great Flood Of 1993 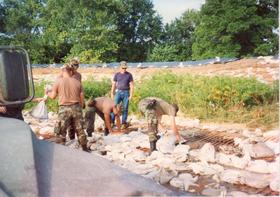 Twenty five years ago, one of the worst natural disasters in the country’s history took place. The Great Flood of 1993 resulted in major flooding along the Mississippi and Illinois Rivers.

But it also showed the best in people who came to the aid of those in need.

On Wednesday, a gathering in Pike County will commemorate the work that took place.

"I think 25 years is one of those kind of anniversaries where people need to look back," he said.  "People who lost their homes and farms, people who came and helped them...to get together and reminisce."

Roderick recalls people from all over the midwest coming in to help in west central Illinois.  Whether filling sandbags, helping people move, work on levees or providing other aid.

The event commemorating the Great Flood of 1993 will happen Wednesday July 25 from 5 to 7 p.m. at the Hull Community Center in Pike County.  The center is located in the old Hull Elementary School at 215 S. Elm Street.  A supper is being provided.

Crisis Management and a Tale of Two Cities

Dr. Timothy Sellnow, a Professor of Strategic Communication at the University of Central Florida, researches topics such as pre-crisis planning.  He said he has spent a lot of time studying communities damaged by flooding and found two cities in North Dakota that offer some lessons.

When Rivers Can't be Controlled, Farmers are Left in Limbo

Driving along rough and muddy gravel roads next to what was once a rich soybean field, farmer Adam Thomas gazes out on an upended mess of tubes, wheels, and hoses from a nearby farmer's irrigation system.