Illinois Gets A Break: New Tax Credit Could Boost Local Housing, Economies, But There’s a Catch

The Quad Cities are divided by the Mississippi River along the Illinois-Iowa border. They all took a big hit during the 1980’s farm crisis, and were left with abandoned warehouses and other buildings.

On the Iowa side, cities had help turning those old buildings into new housing and businesses.

“We rehabbed almost every building that you can see in sight right now with the exception of two,” Kyle Carter, executive director of the Downtown Davenport Partnership, said looking out over Davenport from the top floor of the Renwick Apartments.

Stack those incentives high enough, and developers can afford to overhaul crumbling structures that may otherwise cost the city more than they make. That kind of development brings in property taxes, construction jobs and quality, affordable places for locals to live.

Beginning this year, developers have access to the same type of tax break on the Illinois side of the river due to a new state law.

Tyler Power, with the Quad Cities Chamber of Commerce, said there’s hundreds of buildings that could apply in that area of the state.

“We have a lot of untapped potential on the Illinois side, and we’re excited to see the projects that get done with that,” he said.

Downstate Illinois faces many ongoing challenges: aging infrastructure, a shrinking population and a retiring workforce, among others. Towns are working to attract new people and businesses to help them grow past those challenges, but that’s difficult when there’s a lack of affordable, middle-income housing. Many Illinois towns also haven’t seen significant downtown construction for decades.

Bonnie McDonald, president and CEO at Landmarks Illinois, said the new state historic tax credit could help rejuvenate struggling areas of the state. She said new residential development could also provide housing for aging residents who don’t want to leave town or lower-income residents who don’t have a car. Stack a federal low-income tax credit on top of historic tax credits, and developers can create housing where it could benefit residents and downtown shops.

“(It) can be very beneficial to have affordable housing in the downtown, and historic buildings provide that asset of transit-friendly or walking-friendly access,” she said.

McDonald’s organization, a nonprofit dedicated to saving historic buildings, lobbied for the tax break for nearly a decade. There were pilot programs for the tax credit in Illinois, helping renovate a few dozen projects with more on the way in a few select areas like Peoria and East St. Louis. That totaled more than $200 million in investment, according to State Historic Preservation Office of the Illinois Department of Natural Resources.

McDonald said it’s a cash-positive program, which means it makes the state and local areas more money than it costs in tax breaks.

But, there’s a catch: The state is only shelling out $15 million a year in tax credits, which will likely leave out many communities that need the incentives for housing and businesses.

The tax cut is worth up to 25 percent of the total amount spent on the project. With a maximum of $3 million for each project, that could be used up after five big projects in Chicagoland. 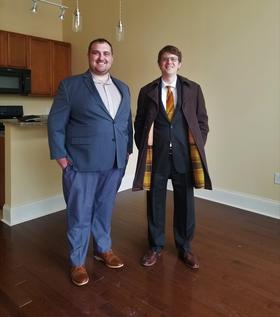 Small towns also still need to offer local incentives to make some properties worth it for developers to fix up, even in the Quad Cities.

The state could set aside historic tax credit money specifically for small projects in certain parts of the state, which could help bring development to rural areas it might benefit the most.

It could mean new rental units, new developers in town and new store fronts to host small businesses. However, many towns are so concentrated on bringing in businesses, they often overlook housing incentives.

It’s a chicken or the egg question: Housing first or jobs first?

“I think the way things are being reshaped in the country now, especially with the millennials, they move to where they want to live first, then they figure out how to make a living,” said John Gruidl, an economic development specialist at the Illinois Institute for Rural Affairs.

Gruidl said small towns are often focusing too much on bringing in businesses when they need to remember that housing is important, too.

“It might be time for the city council and the mayors to begin to reconsider, are we putting enough resources, both time and money, into housing as we are into business attraction?” he asked.

Gruidl and his colleagues surveyed rural Illinois towns and found that, within their own population, there’s a need for middle-income housing — the kind that young entrepreneurs may want to buy and settle down in.

“The people in the middle are getting squeezed out,” said Sean Park, the program manager for the state Value-Added Sustainable Development Center, speaking of houses between $70,000 and $150,000.

The rural affairs institute recommends town leaders first figure out what housing and jobs they already have and figure out where, in both, they can strategically invest for future growth. They’ve already helped some towns with that.

For others working towards an upgraded housing fleet and looking to bring in new developers, Carter in the Quad Cities encourages town leaders to identify buildings -- or better yet, blocks of buildings -- that could qualify for tax credits or low-interest loans. He says communities need to do some of the work for the developers and then reach out.

“That’s the kind of stuff that can expedite a project,” he said.

If towns are interested in the state historic preservation tax credit, a mandatory meeting is scheduled for June 5 in Springfield. More details can be found here.

How One Illinois Teacher Uses Art To Empower Students

In highly politicized times such as these, teachers are often warned to remain neutral in the classroom. But at a public primary school in Kewanee, Illinois, one art teacher is showing kids it’s their duty to speak out about injustices.

A Story Of Resilience: How Perry Cline Overcame Incarceration, Heroin Addiction To Earn A Degree

Perry Cline’s story is a remarkable one. He’s a formerly incarcerated 51-year-old man who overcame the odds to graduate from the University of Illinois last month.

What Happens To Pot Convictions If Illinois Legalizes?

The push to legalize recreational marijuana in Illinois could get a jump-start early next year. State Sen. Heather Steans (D-Chicago) said she plans to introduce legislation early next year to tax and regulate the use and sale of marijuana.

Project Rebound is a non-profit organization that looks for single family homes in Galesburg that can be bought, renovated, and then sold for $60,000 or less with no down payment.  It strives to help people who are working stable jobs and have good credit but who don't make enough money to save for a down payment.