Illinois Gets "C" For Maintaining Infrastructure

A group of civil engineers says Illinois needs to pay more attention to maintaining its infrastructure. The American Society of Civil Engineers gave the state a "C-minus" on its report card earlier this year. Darren Olsen, who's with the group, says recent breakdowns in infrastructure have gotten national attention, but he wants to turn that attention into action. 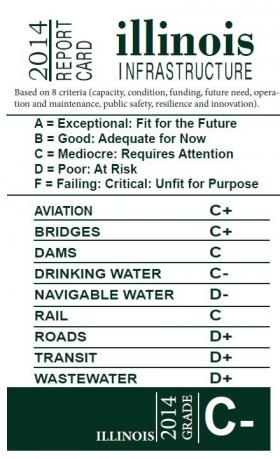 "We do hope that we can find sustainable infrastructure funding mechanisms so that we don't need to come to these precipices over and over again where the highway trust fund is going to go insolvent or our waterways are going to start deteriorating because the water resources bill doesn't get passed." -Darren Olsen, ASCE

Olsen says Congress' recent deference of highway funding could lead to even more expenses down the road. Here in Illinois, Olsen says roads are an issue, as well as public transit systems and waterways.

Full Steam Ahead For Amtrak

Amtrak ridership in Illinois has risen in recent years; it's up almost 85 percent from 2006 through last year. That trend developed after the rail service added routes. The train service could grow more in the future.

In 2006, lines branching out from Chicago that went to Carbondale, Quincy and St. Louis added trips.

Missourians decisively rejected a sales tax increase earmarked for transportation projects, making for a striking defeat for a well-financed campaign from proponents and a victory for an ideologically diverse opposition coalition.

The tax – commonly known as “Amendment 7” or the “transportation tax” – would have raised Missouri’s sales tax by 0.75 percent for 10 years. It would have also barred Missouri's policymakers from instituting tolls or raising the state’s gas tax during that same time period.