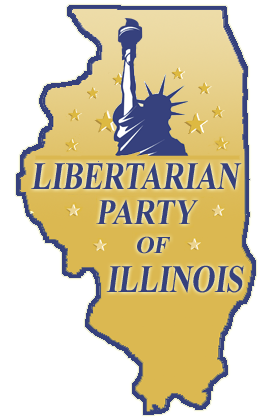 On Nov. 4, Illinois voters will choose from the Republican and Democratic statewide candidates they've been hearing about for months. But there will also be a third choice in those races: candidates representing the Libertarian party. But getting on the ballot wasn't easy for the Libertarians.

Listen
Listening...
/
As Hannah Meisel reports, Libertarian candidates for statewide office will be on the Nov. 4 ballot after a strange summer.

To get their candidates on the November ballot, third parties in Illinois have to turn in the signatures of at least 25,000 registered voters — five times more than the 'established' parties: Democrats and Republicans.

The Libertarians turned in over 43,000, but the Republican Party objected to thousands of them. Challenges are common.

But according to a Chicago Sun-Times report, a lawyer for the Illinois GOP hired a private security firm to find voters who'd signed the Libertarians' petition. These investigators, who reportedly wore guns visibly, asked these people to sign an affidavit stating their signatures weren't valid.

The director of the Board of Elections, Rupert Borgsmiller, says he hadn't heard of a similar situation, but didn't want to comment on the methods the Republicans used.

"The proponents were trying to gather evidence to show that their arguments were correct," he said.

But fellow board member Harold Byers says the story struck him as odd.

"That was going pretty far," he said. "Sending people out early in the morning, it's like the Gestapo almost coming out or something to grab you."

In the end, the Libertarians were stripped of 17,000 signatures, but had just enough to make it on the ballot. The Board ruled that neither the Green Party nor the Constitution Party had enough valid signatures to get on the ballot.

You may know by now that a question regarding term limits has been knocked off the ballot by the courts, but do you know why? Regardless of the court rulings, don't expect the issue to go away.

Republican nominee for governor Bruce Rauner and his attorneys say they tried to write a proposal that could pass constitutional muster.

Candidates from the Illinois Green Party will not appear on the November ballot.

A federal judge Thursday denied the party reprieve from the state's election requirements for third parties.

The Green Party had sued, claiming the barriers for third parties are too onerous ... threatening the right to free speech and equal protection.

Even though Illinois' general election is months away, a controversial ballot question could be answered by the end of this week. Friday is the deadline for a term limits initiative to make it on the ballot.

Republican's nominee for governor, Bruce Rauner, has made instituting term limits for legislators a central plank of his campaign.

That would require a constitutional amendment. Rauner funded an effort to collected a half million signatures, so that the question could go before voters this fall.