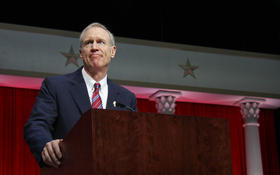 Governor Bruce Rauner says action he has taken without the General Assembly will help the state attract businesses and jobs.

A non-profit department will work within the state's existing economic development agency, but will be funded with private money.

"Every year, we're going to set goals for how many companies we're recruited, how many jobs we've brought from other states and other nations here to Illinois.  We're going to measure and report on it on a constant basis," he said.

The Governor indicated he wanted the best people to work within the unit.  However, he says it can be difficult to attract them because rules covering employment in state government.

The Republican used his executive authority to bypass the legislature as Democrats have raised the issue of transparency.

“Our main concern has been that public accountability follow public dollars. We hope the governor shares that as a priority if he is moving forward on his own,” said Senate Democratic Spokesman John Patterson.

Rauner says his new Illinois Business and Economic Development Corporation will be have the task of negotiating with companies on tax breaks and other incentives.

It will have its own board.  The Governor says he's yet to decide if he will serve on it, but says either way he will be very involved.

Republican Governor Bruce Rauner used his State of the State address Wednesday to say he wants to bring competitive balance back to Illinois.

Illinois Governor Bruce Rauner shared his vision for the next year during his second State of the State speech, which was delivered to Illinois lawmakers at noon Wednesday.

What Will Rauner Say In His State Of The State Address?

Illinois residents will hear from their Governor Wednesday when Bruce Rauner gives his annual state of the state address. It comes at a difficult time in Illinois government: For nearly eight months there has been no budget.

Social service agencies that depend on state funding are closing programs, the backlog of unpaid bills is piling up, and some public universities are moving forward with layoffs.