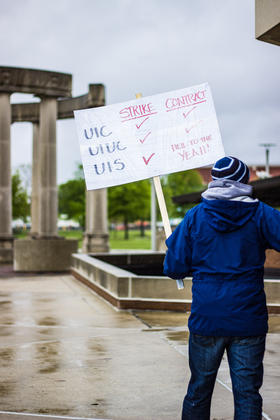 The faculty will be back in class today for the start of finals week. The agreement was reached after long negotiations over the weekend including 16 hours Sunday.  Details won’t be released until a ratification vote later.

But Kristi Barnwell, a history professor and union officer, says the resulting contract provides the personnel policies faculty wanted, as well as some slight pay increases.

"You know, to some extent, we're all really relieved, and the enormity of what we've accomplished will probably sink in over the next couple of days."

The following new release was issued from the union.

After five days out of the classroom, University of Illinois-Springfield United Faculty (UISUF) reached a tentative agreement with University administration and suspended its strike. The deal was reached following three days of marathon bargaining sessions.

“We have negotiated a contract that will establish greater transparency going forward,” said Kristi Barnwell, Union Vice President and Associate Professor of History. “This is a step forward in bridging the gap between faculty members and administration.”

“More than anything, we as faculty have demonstrated just how integral we are to the success of this institution,” said Ryan Williams, Associate Professor of Criminology and Criminal Justice. “I hope we have shown our students what it means to stand up for what you believe in. For us, it was a high quality educational experience.”

The final contract remains to be ratified by a vote of faculty before it can be put into effect. “We will call for a membership meeting and vote on the contract before the end of semester,” said Lynn Fisher, UIS United Faculty President and Associate Professor of Anthropology.

Chancellor Susan Koch participated in the talks, and even sent pizza to the union team.  Later, the Chancellor and Union President Lynn Fisher issued this joint statement.

“After a productive weekend of good faith negotiations, we are pleased to report that a tentative agreement between the University administration and the new UIS faculty union has been reached. The strike is over. As a result of leadership on both sides and a shared commitment to progress in the interest of our students, the work stoppage (strike) that began last week will not continue tomorrow. Final exams will proceed as scheduled.

We are so glad to be finishing this academic year on a strong note, with the largest-ever graduating class receiving their diplomas on May 13. As we move forward, we will continue working together to realize more of the aspirations of our students, faculty and all those who belong to our university family.”

The union will vote on whether to ratify the contract sometime in the next two weeks.

Professors at University of Illinois Springfield Go on Strike

Nearly 170 tenure and tenure-track professors at the University of Illinois Springfield went on strike Tuesday.

The school and the UIS United Faculty union have been  trying to work out a contract for 20 months. While salaries have been part of the discussion, the sticking points include issues of promotion and tenure.

Past Due: Improving The Process Would Be Less Painful Than Budget Choices

Years of mismanagement led to the state’s current fiscal crisis. A recent report from the University of Illinois’ Institute of Government and Public Affairs (IGPA) suggests changes to the budgeting process that could help prevent future disasters.

Almost every Lee County employee will get a pay raise on July 1, 2017, despite the fact that the county’s proposed budget for the upcoming fiscal year is in the red by roughly $1.5-million.

The proposal would release more than $800 million that’s been collected in special state accounts for higher education and human services, areas that have been particularly squeezed during the 22-month budget stalemate.