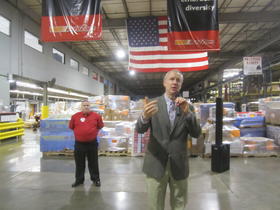 Say a worker doesn't want to be in a union. He or she don't have to be.

They still benefit from the union's efforts -- they're covered by a union-negotiated collective bargaining agreement, covers wages, vacation time.

Rauner --- a Republican -- called the Supreme Court action "tragic." He says everything a public union does is political by nature.

"This is a very big issue. It's an issue of freedom of speech, and freedom of political voice," he said. No American should be forced to fund an organization that they disagree with politically, that should not be the case."

Rauner supports a lawsuit filed by a trio of state employees who don't want to be in a union, and don't want to pay any fair share dues.

"It doesn't change our plans. I am a believer that that Supreme Court decisions -- it ended up being a split 4-4 --- if Justice Scalia where alive, he made it pretty clear he supported the freedom of government employees to choose,"he said.

He says he expects that case will be the next to reach the nation's high court. By then, he says, he hopes there will be a full bench of nine justices who can settle the issue for good. Illinois' federal suit has been on hold pending the outcome of the California case.

The rift between Illinois Governor Bruce Rauner and the state's public employee union has escalated. Friday morning Rauner announced he's asking the state labor board to decide if negotiations with AFSCME have reached an impasse.

News Analysis — On September 18, 2012, the year before Bruce Rauner declared his candidacy for governor, he shared his vision for a crisis that could help reshape state government.

The Illinois Supreme Court will be asked to re-visit an opinion it just issued March 24. State employees' salaries are at stake.