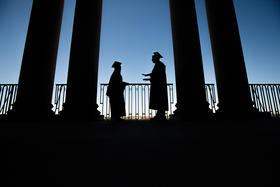 Republican Gov. Bruce Rauner has often blamed the Democratic Speaker of the Illinois House, Michael Madigan, for the state's problems.

He did it again yesterday, when he accused Madigan of delaying a higher education funding deal, so he could use it as a campaign issue ahead of the March 15 primary.

"You know what the Speaker has told them? I haven't verified this directly, but I have good sources. What Speaker Madigan has gone to each of the universities and said: "If you step out and support anything that the governor's proposin', I will cut you out of the final budget solution.'"

"Governor sounding a little more irrational than usual today," said Madigan's spokesman, Steve Brown, in response. "The only one who has cut higher ed, or threatened cuts to higher ed, is himself."

Universities will need both Rauner and Madigan's support if they're to get funding after an eight-month wait.

An official from Western Illinois University says it doesn't want to get caught in the middle of a 'he said, 'he said' situation," as the budget situation is "beyond dire" and WIU's priority is its students.

The General Assembly could take up additional measures to fund higher education as early as today (TUES) when lawmakers are in session. That could include an attempt to override Rauner's recent veto of funding for community colleges and "MAP grants" for low-income students. The governor says that plan would have added to the deficit.

He backs other proposals which would lead to cuts elsewhere in the budget. Democrats say they've got concerns about that. Eastern Illinois University President David Glassman said in a statement he appreciate all efforts to resolve the funding crisis. A statement from Chicago State University says it doesn't take sides in partisan disagreements.

Roughly 200 people marched through the Western Illinois University campus Tuesday afternoon.  They wanted to make a public statement about their dissatisfaction with decision-makers in Springfield.

Low-income college students who were promised state help paying for their tuition will continue to go without it. Illinois Governor Bruce Rauner has followed through on his pledge to reject funding for the Monetary Award Program (MAP).

Gov. Bruce Rauner is scheduled to deliver his budget message to the Illinois General Assembly this Wednesday. In advance of that, interest groups are lining up to plead their case for state funding. On Monday, representatives of the state’s colleges and universities made one such pitch.

Representatives from across the higher education spectrum gathered at Western Illinois University in Macomb to urge the state to provide funding for colleges and universities. But just hours afterward, Governor Bruce Rauner vetoed a measure (SB 2043) that would have funded MAP grants and provided at least a bit of income for the schools.