Who Will Take On Bruce Rauner? Democrats' Search Begins at DNC

Illinois Democrats joined fellow party members in Philadelphia Monday for the Democratic National Convention. But state politics, not the national scene, was the focus of the delegation’s first official day of business.

The Illinois delegation began the day as it will the rest of the week: With a breakfast, followed by a meeting featuring a series of speakers.

Before Attorney General Lisa Madigan was even able to finish her tea (black, with caffeine, without any sugar or cream) she was interrupted by reporters wanting to know about her political future, and whether it includes a run for governor in 2018.

“The very first priority right now is making sure that we win in November and by that I mean that we make sure that Hillary Clinton becomes the next President of the United States," Madigan said.

No matter how the question was phrased, the answer was some variation of a non-answer.

And yet who Democrats will put up against Gov. Bruce Rauner two years from now was very much the unofficial theme.

One of the guest speakers was Dan Malloy of Connecticut: “I’m a Democratic Governor, you need one of those, you need one of those, let’s not forget that, right? We need ya, we need ya, that’s how we do this," he said, prompting hoots applause, and this from the morning’s emcee, Cook County Recorder of Deeds Karen Yarbrough: “Boy, he reminds me why we need a Democratic Governor in Illinois! And I just bet we might have somebody in this room that will step up to the plate. Somebody, anybody. Somebody! Who’s a Democrat! Somebody!”

During this, things got mildly awkward.

All eyes, it seemed, turned to Illinois’ senior U.S. Senator Dick Durbin, who was sitting on a small stage at the front of the room.

He didn’t say anything then, and the program moved on.

But when it was through, House Speaker Michael Madigan tacitly acknowledged that the focus on Durbin was deserved. Madigan – who’s also the chairman of the Democratic Party of Illinois – says he met with Durbin about the governor’s race.

“Obviously his record in the US Senate, his record in Illinois government, he’s written an exemplary record as a public servant, so Sen. Durbin would be uniquely qualified," Madigan said.

“Let’s keep an eye on this election, don’t waste time or your breath on an election 30 months away," Durbin said in a press scrum afterward. “I encourage everyone who is interested in the future of Illinois to start with the future of America and elect Hillary Clinton President.”

He never explicitly said no (though granted he never said "yes, I’m running” either); however it’s telling if a savvy politician like Durbin didn’t completely nix the idea.

Given Madigan’s praise of Durbin, coupled with his connections, high profile and so on, you can expect that there’s a good chance the party establishment would back Durbin if he does run.

But another Democratic powerbroker, Chicago Alderman Ed Burke, questions whether Durbin would leave the Senate, especially if Democrats regain control of the chamber following the next election.

“But some of the delegates here that I’ve talked to are mentioning a name that hasn’t been mentioned, and that’s Valerie Jarrett, and I think that she’d be an exciting possibility for governor of Illinois," Burke said.

Valerie Jarrett, as in senior advisor to President Barack Obama. Burke says Jarret has the fundraising chops, the administrative background, and could motivate women, even though Jarrett hasn’t ever held elective office. 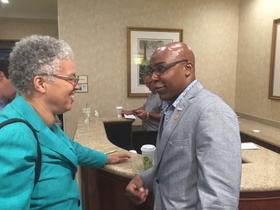 Enter another possibility, another Chicago Democrat, Sen. Kwame Raoul, who says he’s open to trying for the job.

“I would want any position that would put me in a position to solve problems, and as I said before we have no shortage of problems in the state of Illinois. I haven’t run from any difficult issues during my tenure in the legislature," Raoul said Monday.

If this election cycle has made anything clear, it’s that the establishment doesn’t have the power to shape outcomes like it once did.

Cook County Commissioner Chuy Garcia became a local face of the progressive movement in his failed challenge last year to Chicago Mayor Rahm Emanuel --- a challenge you could consider a proxy fight for what’s played out on the national stage with Hillary Clinton and Bernie Sanders.

Garcia says Durbin would be an "outstanding" candidate for governor.

“But we shouldn’t rule out an unexpected candidacy from other parts of the party," Garcia said. "Because if you look at the results I n downstate you’ll see that from a different place.”

Garcia says he’s not ready to go public with any names, but he says he’s working at it, and is trying to stir things up in Illinois politics as much as he can.

With the presidential election approaching, it’s unlikely any Democrat will put the donkey, before the horse and declare their candidacy soon.

But with the deep-pocketed Republican Governor Bruce Rauner having already said he plans to run again, it’s not too early to begin laying the groundwork. Given Rauner’s record in Illinois, Democratic Party Chairman Michael Madigan says he expects that plenty of Democrats will be anxious for the chance to try to unseat him.

Illinois Issues: The Impasse And The Damage Done

Democratic leaders in the legislature and Gov. Bruce Rauner appear to be close to a deal to approve some funding for social service providers, higher education, capital construction and state operations. The proposal would also fund K-12 schools for all of next fiscal year.

But the plan can’t erase the destruction caused by the state going for a year without a budget.​​