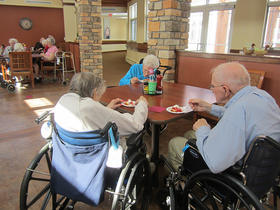 Illinois could join a handful of states that allow cameras to be installed in the rooms of nursing home residents.

Supporters say it would give families peace of mind to have electronic monitoring of the care their loved ones receive.   But there are also concerns, especially when it comes to privacy:

"Nursing homes, a lot of people tend to forget... that is their home," Hinsdale Republican Representative Patti Bellock said.

Supporters say the cameras would only be installed when the resident or family agrees.  They would also have to cover the cost.

Backers, like Chicago Democratic House member Camille Lilly, say it would provide a record of care.

"I do truly believe this legislation will give families peace of mind as they leave family members with others," said Lilly.

The recordings could be used in court, for example if there are allegations of abuse.  And anyone caught tampering with the camera could face charges.

Attorney General Lisa Madigan is pushing the measure. It has won House approval and moves to the Illinois Senate.  Missouri is considering a similar law.

The 14th edition of the booklet includes new listings about a Parkinson’s disease support group at The Elms and about services offered by the VFW. As in the past, it also provides information about home health care, transportation services, medical equipment, support services, and more.

Illinois lawmakers and Governor Bruce Rauner have agreed to restore about $97 million that had been cut from K-12 schools for the final few months of the fiscal year.  The cuts resulted from the rollback of the temporary higher income tax rate and a 2.25% across the board reduction to the state's budget. Some school districts in west central Illinois will benefit, but it might not make much difference.