A Giant of the Giant Saxophone

Jazz biographer Gary Carner said he did not choose to focus on baritone saxophone player Pepper Adams so much as Adams chose him.

Carner said that happened when he was at the City College of New York in the mid-1980s, looking for a jazz musician to focus on for his Master’s thesis.

“I chose five musicians that I thought I would like to research and write about and interview.  Pepper was one of them and he was the only guy who got back to me,” said Carner.

“Pepper called back and said he’d love to meet me. We hit it off and the rest is history. Here I am 30 years later more excited than ever.”

Carner has been called the world’s foremost authority on the saxophonist and is curator of a website devoted to Pepper Adams (PepperAdams.com).

He will talk about Adams during a presentation Friday, November 1, 7:00 pm, in Sallee Hall 101 at Western Illinois University.  Among other things, Carner plans to play some obscure Pepper Adams solos from audience recordings and show some rare video recordings of the musician.

Carner said Adams was not flashy and did not frequent the celebrity scene. Instead, he was “a musician’s musician.” And he believes Pepper Adams should be a household name.

Carner said jazz players of Peppers’ generation had tremendous admiration for him, and all the baritone players today “just deify him – he’s the exemplar of everything you’re supposed to be.”

Carner is author of Pepper Adams’ Joy Road, which was honored by the ARSC as the Best Jazz Discography of 2013. Carner also plans to write a full-length biography of Adams.

Adams was born in Michigan in 1930. Early in his career he played the clarinet before switching to the baritone sax.

Carner said he got to know Adams during the last few years of the musician’s life. Adams died of lung cancer in New York City in September, 1986.

Carner said he got a chance to go through Adams’ estate where he found a lot of unreleased material, including a recording on the Motown label. 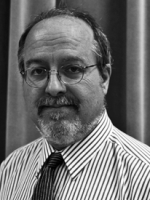 Ken Zahnle
Ken is Music Director for Tri States Public Radio, overseeing all music programming, hosting the morning classical music program “Ovation,” and engineering recorded performances for TSPR. Ken is from Highland Park, IL, and has degrees in music and broadcasting from Western Illinois University. Ken says listening to fine arts radio and old school classical stations from Chicago in his teenage years, coupled with a few months on a glorified tin-can telephone of a radio station in an on-campus residence hall, led to his career in radio. Ken is no stranger to radio, having worked as a student staff announcer at WIUM, news director at WKAI/WLRB/WLMD in Macomb, and Program Director at Tri States Audio Information Services. When Ken is not busy with radio and music programming he enjoys helping Macomb High’s Marching Band, playing jazz, and watching his three sons discover the big, wide world.
See stories by Ken Zahnle
Latest Stories