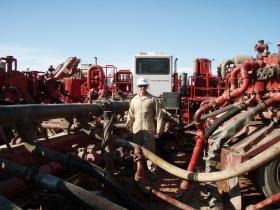 Business and labor leaders are urging Illinois' Department of Natural Resources to finish the rules for hydraulic fracturing. The coalition says it's left wondering if the governor's administration might be dragging the process for political reasons.

Listen
Listening...
/
As Hannah Meisel reports, the Grow Illinois coalition is urging the Illinois Department of Natural Resources to finalize rules for fracking.

It's been over 400 days since the General Assembly passed a law to allow hydraulic fracturing in Illinois. Proponents say the technique of drilling for natural gas deep in the ground will lead to job and revenue growth.

But the Department of Natural Resources has yet to finalize the rules that need to be in place before fracking can begin, leaving drillers to wait.

Mark Denzler, with the Illinois Manufacturer's Association, says that in conversations with Governor Pat Quinn's administration, he got the sense it set a deadline for the rules for mid-November — after the election — on purpose.

"They've said there's more votes in the Chicago suburban area than there are downstate and so it's an electoral ballgame," he said.

The thought being that it could be to Quinn's political advantage to keep a controversial practice like fracking out of headlines — at least more so than creating job in downstate Illinois, where there are fewer voters.

According to one study from Illinois State University, the fracking industry could create up to 45,000 jobs in the next five years, something Illinois AFL-CIO president Mike Carrigan says the state can't pass up for unemployed workers in southern Illinois.

"When they go to work, there are paychecks on Friday," he said. "Paychecks go in the community banks, those members become consumers in their community and then the communities in the area benefit from the economic stimulus."

DNR spokesman Tim Schweizer says there's no political motivation, and that the agency is taking the time it needs to consider public comment.

"The department has been working on getting the rules in place since the day the legislation was signed into law," he said.

Schweizer says DNR is also on track to hire extra staff to enforce fracking rules once they go into effect, but that's also taken a bit of time.

But the coalition doesn't buy DNR's reasoning. Denzler points to Indiana, which shares the New Albany Oil Shale with Illinois, and already has a natural gas industry up and running. A few major companies have contracts secured in anticipation of fracking in Illinois, but instead of waiting, they're focusing their investments on Indiana.

Improving the Environment While Creating Jobs

Corporations and mainstream media often repeat the “jobs vs. the environment” angle to situations, but that’s a false choice.

Fracking Not All It's Cracked Up To Be

Illinois’ legislature on May 31 signaled that fracking can begin, overwhelmingly approving a plan to regulate the high-volume gas and oil drilling despite considerable testimony in opposition, hundreds of people rallying and protesting at the Capitol and Gov. Quinn’s office, and five southern-Illinois counties and four cities, including Carbondale, voting to wait.