We wrap-up our series on "Flowing Fuels" with a look at who is responsible for inspecting pipelines in Illinois.

Listen
Listening...
/
Jenna Dooley reports pipeline inspections are based on location and type of resource they carry

In August, a fuel pipeline in Erie, Ill., exploded under a cornfield, sending flames hundreds of feet into the air. Dozens of people were evacuated. The pipeline was carrying a mix of ethane and propane. The blast is still under investigation and raises questions about who monitors pipelines that flow just beneath the surface.

The short answer: it depends.

The Illinois Commerce Commission (ICC) regulates pipelines, but it is limited to checking non-hazardous lines that begin and end in the state. That includes natural gas.

"We're a hub; everything came through Illinois at one time or another. It was a route to the east and a route to the north, and that's where we needed the natural gas." -- Darin Burk, Pipeline Safety Manager, Illinois Commerce Commission

There are 63,000 gas mains in Illinois distributing gas to consumers.

Burk says the ICC has a minor role in regulating oil pipelines like Flanagan South, currently being built in Livingston County.

"If an operator wants to build a hazardous-liquid pipeline in Illinois, they don't really need a permit from us to do it. In most cases, they are going to seek a certificate in good standing," Burk said, "and that's required if they want to seek eminent domain."

That's what happened in the case of the Flanagan South. 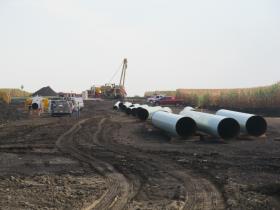 All pipelines and any others that cross Illinois' borders are under the eye of the federal government- specifically, the Pipeline and Hazardous Materials Safety Administration, or PHMSA.

That means the federal government is responsible for a lot of pipelines.

Damon Hill is a spokesman for PHMSA.

"We are looking to make sure operators are following our construction and design requirements for pipelines," Hill said. "We are looking to see that they are using qualified personnel, looking at welding practices, and making sure that the pipeline is being lowered into the ground correctly in a way that's not damaging to pipe material or damaging to coating of the pipeline. We also may look at pipeline operator records to make sure they are complying with our regulations."

The operators also have to monitor their own lines. Kevin O'Connor is a spokesman for Enbridge, the Canadian company who will operate the Flanagan South line.

"We routinely run what are called smart pigs through the line," O'Connor said. "These are highly sensitive computer systems; they almost look like a jet engine that kind of flows with the oil. It can detect anomalies in the pipe."

So how can people find out who is responsible for the pipelines in their backyard? 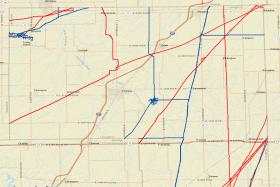 PHMSA's Damon Hill says that information is available to the public through a federal online pipeline mapping system, but the maps are limited.

"The pipeline mapping system is now restricted to only a county level. That's since 9/11 due to safety concerns."  --Damon Hill, spokesman, Pipeline and Hazardous Material Safety Administration

Reporter Tina Casagrand wrote an extensive article, with support from the St. Louis Press Club, about the development of the Flanagan South pipeline starting in Livingston County. She says it took months to connect the dots of pipelines.

"For me to find out that the original Spearhead pipeline that runs adjacent to the proposed Flanagan South was built in 1952 (BP bought it at some point, I'm still not sure when) and then BP sold it to Enbridge in 2005, to find that out took a lot of online research," Casagrand said. "The name that Spearhead is filed under is actually CCPS Transportation Inc. is was a lot of first person leg work and kind of talking to the farmers and they knew a little bit about the history."

If there is a history of incidents, Damon Hill says the information is harder to find.

"Those inspection reports are not available publicly, but we do offer certain information following inspections," Hill said. "We put that information on our website on our operator pages that says when a pipeline was last inspected and what type of inspections were completed and whether or not there were any violations or any enforcement actions taken against the operator as a result of those inspections. If there was an enforcement action take, those documents would be available to the public."

For natural gas pipelines within the state, ICC Pipeline Manager Darin Burk says the commission watches new lines as they go in the ground. Inspectors also look at records and programs that are required under code, at least once every three years.

"A lot of the operators are inspected more frequently because they have more pipe, so we spend more time," Burk said. "We try to run a risk-based program. If an operator has older facilities or has had problems, we  put more resources towards verifying that the issues are being addressed," Burk said.

Burk says the ICC will start posting incident reports on its website. The commission is still working to build the database. Burk says residents who are unsure about who owns a pipeline or how deep it goes should call his office first.

Construction is underway on a new oil pipeline that will carry Canadian oil across several states. The line will begin in Illinois.

In this report, you'll hear about the potential benefits and concerns with the project.

A St. Louis-based environmental group has filed a lawsuit against the U.S. Army Corps of Engineers for failing to provide information about a multi-state oil pipeline project that would go through west central Illinois.