Democratic Gov. J.B. Pritzker has made it a priority to change the tax structure so people making more money pay a higher rate.

Because of that, it’s not surprising the measure passed on a party-line vote, with only Democrats voting in favor. 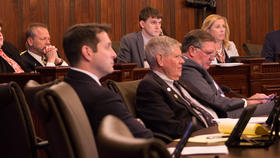 Republicans, like state Sen. Dale Righter, from Mattoon, said they‘re worried this would make it easier for future legislatures to endlessly raise taxes.

“Politicians ... are pretty good at the class-warfare game,” Righter said. “And if you can point to them and say, ‘Well we’re going to get more money for your schools but we’re going to make the guys over there pay for it,’ that makes it easier to do.”

Democrats counter that for Illinois politicians, voting to raise taxes has always been difficult and rare. 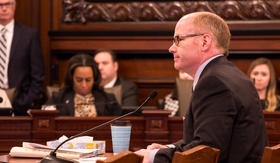 “I just don't know how to respond,” said state Sen. Don Harmon, a Democrat from Oak Park and lead sponsor of the constitutional amendment. “It's the same problem we have today with a flat tax. We could raise it, but it’s really hard to do. ... It’s not going to be any different with a fair tax than it is today with a flat tax.”

Republicans and their allies in the business community also argue a graduated income tax would be bad for Illinois‘ economy.

A graduated income tax requires changing the state constitution — and on that voters would have the final say. Democrats want that question on the ballot in the fall of 2020.

After years of campaigning, Democrats are moving ahead with a plan to change Illinois’ tax system. On Tuesday they formally introduced the language they want to change in the Illinois Constitution.

Illinois Issues: Why Does The State Have A Flat Income Tax?

Illinois is one of only eight states with a flat income tax. The reasons can be traced to the state’s first-ever successful attempt at putting an income tax in place.

An effort to change the current tax structure is underway, but supporters face a fast-approaching deadline.

Gov. J.B. Pritzker wants to create a host of new taxes to help balance Illinois’ budget — on everything from e-cigarettes to medical insurance companies.

NPR Illinois reporters have been breaking down those revenue-generating ideas. Today we’re looking at a potential tax on shopping bags.

Illinois Governor J.B. Pritzker is asking state lawmakers to raise the tax on cigarettes, and begin taxing vaping products. It’s part of a plan he introduced last month to balance the state budget.