Illinois May Be Set To Repeat Budget-Less Year 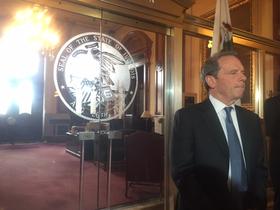 Illinois could be heading into a second year without a budget. Lawmakers are beginning their final day of the regularly-scheduled spring session without a deal.

It's setting up to be a repeat of last year.

Democrats, passing a spending plan Governor Bruce Rauner says he'll veto because it's out of balance.

With Rauner and his fellow Republicans making a budget deal contingent on his "Turnaround" agenda.

And each side accusing the other of holding the state hostage until they get their way.

"Hostage taking is when you don't pass an entire budget at all for two-straight years in exchange for some nebulous, business-friendly reforms," Senate President John Cullerton said following a Monday evening meeting with the governor and other three legislative leaders.

House GOP leader, Jim Durkin put the blame back on Democrats, saying "their attitude is … to move into the summer and to basically hold taxpayers hostage for the remaining of this fiscal year." 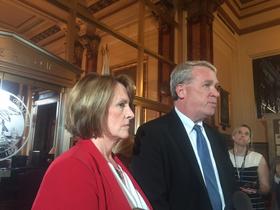 Durkin accuses Democrats of stalling on an agreement.

Even so, House Speaker Michael Madigan says working groups of legislators are making headway on the controversial issues the governor has tied to a budget deal -- just apparently not enough.

Madigan says Democrats will not agree to anything that sacrifices the standard of living for middle class families. He plans for the House to return to Springfield after Tuesday's scheduled adjournment.

"So I would say that if we get to tomorrow night and there's no agreement, I would call upon the governor to continue to schedule his working groups on a regular basis. Because the House will be in continuous session. We will be here every Wednesday through June, starting next week," Madigan said.

After midnight on May 31, passing a budget would require a super-majority, making a deal even harder.

The Senate has yet to take up the spending plan advanced out of the House last week, but Cullerton indicated the chamber will vote on a full year budget before adjourning. Cullerton says he had a heavy hand in crafting that plan, and securing its hefty boost to school funding.

Republicans say the Democratic plan is $7 billion dollars out of balance, and that Democrats are trying spend excessively to force a tax hike after November's election.

The governor and legislative leaders are scheduled to meet again Tuesday.

Rauner Would Veto House Budget Plan ... All Of It. (So Prepare For Summer Session)

Lawmakers only have two days to pass a budget before a pending deadline. But even as top leaders came out of a meeting Sunday, saying that a deal is possible, it was clear the chances are woefully slim.

Gov. Bruce Rauner has danced around it before. But this time, he didn't flinch.

Rauner says if it gets to his desk, he will reject in its entirety the only spending plan currently alive in the statehouse: a plan House Democrats approved last week.

School districts across Illinois are worried about whether they will receive state funding for  next school year.  They say without the state support, teachers and other employees could lose their jobs, programs could be cut, and some schools might close their doors.

Even though the school year is over at Western Illinois University, the Macomb community is still rallying for higher education funding.  About 50 people -- including Western faculty, staff and a few students -- gathered alongside members of the community for a demonstration that started in Chandler Park.