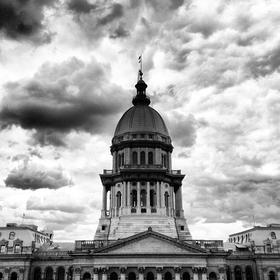 The budget passed by the Illinois General Assembly does not rely on extending the 2011 income tax hike, as originally planned by Democratic leadership. Instead, it's based on state government borrowing from itself.

Listen
Listening...
/
As Hannah Meisel reports, "interfund borrowing," the process by which the state borrows against itself, is not anyone's first choice for budgeting.

Instead of making the five percent income tax rate permanent or chopping away at government programs, lawmakers opted to fill a massive hole in state revenues by doing something called "interfund borrowing."

The funds are filled by specific fees, and are meant to be used for specific purposes. Borrowing from them is kind of like using a vacation fund to go grocery shopping.

The FY 2015 budget allows Gov. Pat Quinn the freedom to borrow up to $650 million from any of those funds. This method of "sweeping" other funds in order to prop up the state's budget was favored by ex-Gov. Rod Blagojevich.

Sen. Daniel Biss (D-Evanston) says without extending the income tax, this is one of the only viable options.

"Hey, let's be honest. We're passing a budget that delays some very important decisions," he said. "And in a situation like that, we need to give the governor the authority needed to manage his way through this situation."

Sen. Heather Steans (D-Chicago) says she has mixed feelings on the state borrowing against itself. But ultimately, she says this stopgap measure is the best option Illinois has right now.

But Republicans, like Sen. Dale Righter (R-Mattoon) think this is a terrible idea. He went as far as calling it "theft."

"I'm concerned about how you're raising the money for those funds and whether or not you're spending the money from those funds the way you told the taxpayers or the contributors to that fund that you would spend it," he said.

Fred Giertz, an economist with the Institute of Government and Public Affairs at the University of Illinois, sees interfund borrowing as unsustainable.

"Even if you get through the year, the year after becomes increasingly more difficult, so it's really a very shortsighted kind of strategy," he said.

Democrats and Republicans alike acknowledge this, and both say this one-time funding technique means they'll likely have to revisit the income tax later in the year, after the November election.

Of course, how they feel about revisiting the income tax lies on opposite ends of the ideological spectrum. Few Republicans in either chamber voted for any of the bills that contained the FY 2015 budget, many saying they could "see through" the Democratic playbook: Pass a stopgap budget now to rationalize extending the income tax later.

Illinois Senate President John Cullerton (D-Chicago) says he's come to an agreement on state spending with the speaker of the Illinois House. But Cullerton is leaving the door open for an income tax hike after the November election.

The Illinois House has voted to undo a series of cuts in the state's program of health care for the poor. Backers of the change say the cuts have come with a significant cost.

Two years ago, Democrats and Republicans agreed to massive reductions in the Medicaid program, with savings estimated at greater than $2 billion. Now Democrats say some of those cuts are costing more than they're worth.

Quinn has been clear about the potential consequences of letting Illinois' income tax rate drop, as it's scheduled to do at the end of the year.

General Assembly Adjourns With Much Undone

Democrats started the session with an ambitious agenda: raise the minimum wage, boost college assistance for low-income students, maybe even change Illinois' flat tax into a graduated one. In the end, none of that happened.