MAP Bill On "Cooling Off" Hold 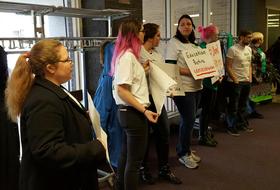 The Illinois Senate President is encouraging Governor Bruce Rauner to rethink his priorities on student aid legislation, but the governor was quick to repeat his promise of a veto.
Listen
Listening...
/

Senate President John Cullerton says he'll hold onto legislation for a couple of weeks, to give the governor time to "cool off," then he'll send it to Rauner for action.

In a statement, Cullerton urges Rauner to "not act rashly, but in the best interest of students, their futures, and the future of Illinois."

Illinois is now in its eighth month without a budget; it's been that long since the state paid for higher education --- including for the Monetary Award Program, or MAP.

Low-income students use MAP grants to help pay for tuition. Some schools are covering the subsidy, while others say they can't wait for the state and want students to pay up.

Legislation Democrats approved last week would cover the grants; it'd also get money to community colleges (but not to public universities).

"This is really a hollow, empty gesture," GOP Sen. Matt Murphy of Palatine said during the debate, summing up his party's stance."This is an opportunity for some people to go back home and say: 'Hey we passed this bill for $720 million for you. Just don't look under the hood and realize we don't actually have $720 million."

The governor's took no time to indicate it doesn't need or want a "cooling off" period; Rauner isn't changing his mind. A spokeswoman says has Rauner made clear he'll veto the MAP measure because there's no way to pay for it.

She says Rauner does back a Republican proposal to pay for higher education, which is coupled with a way to pay for it by giving Rauner latitude to unilaterally manage, and cut, the budget elsewhere.

Changing how Illinois funds its schools is Senate President John Cullerton's top priority as a new legislative session gets underway. Cullerton, a Chicago Democrat, says Illinois shouldn't fund schools at all next year until it comes with a more equitable way to do it. John Cullerton says the way Illinois funds schools "crushes dreams" and "stifles growth."