Pension Decision Will Wait Until At Least December 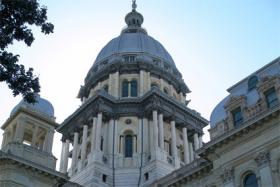 It could be December before a judge decides on the legality of Illinois' pension overhaul law for at least another five months. Attorneys met Thursday in Sangamon County Court and agreed on a timeline for the case.

Listen
Listening...
/
As Hannah Meisel reports, attorneys from both sides of the pension case agreed to a schedule that won't yield a decision until at least December.

Though it was to have already begun taking effect, a judge has put it on hold until its legality is sorted out in court.

According to the schedule attorneys have agreed to, that could take five months — or longer.

While the state has argued the law is necessary given Illinois' fiscal 'crisis,' Aaron Maduff says that won't hold up. Maduff is an attorney for the state's retired university employees.

"The pension protection clause is not subject to a police powers defense at all and the state can come in and complain that the state is totally bankrupt, and they still can't do what they're doing under the constitution," he said.

The law reduces retirees' benefits and requires current state employees to work longer until they can retire.

A judge has blocked the Illinois pension overhaul from taking effect next month.

Pension Delay Comes Too Late For Some WIU Employees

The implementation of Illinois’ pension reform has been delayed by an injunction issued by a Sangamon County Judge.