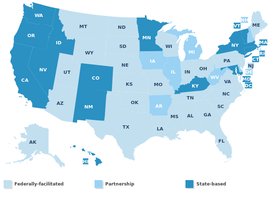 Following today's ruling  from the U.S. Supreme Court, Illinois residents who bought health insurance under the affordable care act will get to keep tax credits that cut the cost of their plans.

The question before the court was if federal subsidies could be given out in states, including Illinois, that did not build their own online marketplaces.

Illinois uses the federal exchange at Healthcare.gov. More then two thirds of Illinoisans who purchased insurance through it receive the cost-cutting subsidies that average about $2,500 a year. If the ruling had gone the other way, the over 200,000 in Illinois who receive the assistance could have seen their premiums more than double. The coverage would likely have been unaffordable for many and Obamacare could have collapsed.

At issue was the wording of the law. The court’s opinion said it was “implausible” that Congress would have intended for subsidies to apply only in state’s that built their own exchanges.

Some Farmers Warming Up to the Affordable Care Act

Until the federal health insurance marketplace opened in late 2013, farmers and ranchers were more likely to be uninsured than many other occupational groups. The Affordable Care Act changed that by requiring them to buy insurance. But it also gave them coverage options they didn't have before.

Illinois lawmakers missed a Jan. 1 deadline to approve a state-run health insurance exchange under the Affordable Care Act. Without its own exchange, the state forfeits millions of federal dollars while leaving consumers vulnerable to paying more for insurance.

Illinois was facing dual deadlines last month when lawmakers made a final effort to create its own marketplace. The first was the looming New Year---which they blew past last week, losing out on as much as $270 million.

For this Thanksgiving, last winter’s “polar vortex” became this season’s “bomb cyclone” – meteorologists’ trendy term for an intense, fast-moving storm resulting from the jet stream shifting and sending frigid air roaring south into the United States, icing the roads and causing wind-chills to flirt with zero.

But the cold can’t last forever.

More than 8 million people nationally signed up for health insurance during the first open enrollment period.