Silicon Valley Startup Aims For Transparency, One Seed Price At A Time

A Silicon Valley startup is pitting itself against major seed companies, alleging that those companies are price gouging in the Heartland. Farmers Business Network’s stated motive is to help farmers by crunching numbers and providing transparency, but it is positioning itself to become a player in the seed business, too.

In the age of endless comparable-pricing data, row-crop farmers can’t turn to the internet to find who is selling the cheapest seeds, something that can easily cost tens of thousands of dollars for large operations.

This is where Farmers Business Network comes in. Farmers pay FBN between $500 and $700 annually, and send in seed invoices and precision ag data like crop yields and crop performance. In return, FBN aggregates members’ information to show how much certain seeds and other inputs, like fertilizer, are selling for all over the country. It also highlights how well crops are growing in particular states or counties.

Large ag companies like John Deere and Bayer already mine some of that data from farmers, though it isn’t clear how all of it is used.

FBN claims one thing is clear from the nearly 8,000 members who farm more than 31 million acres in the U.S. and Canada: There are major discrepancies in ag chemical prices and region-wide fluctuations for seed prices. 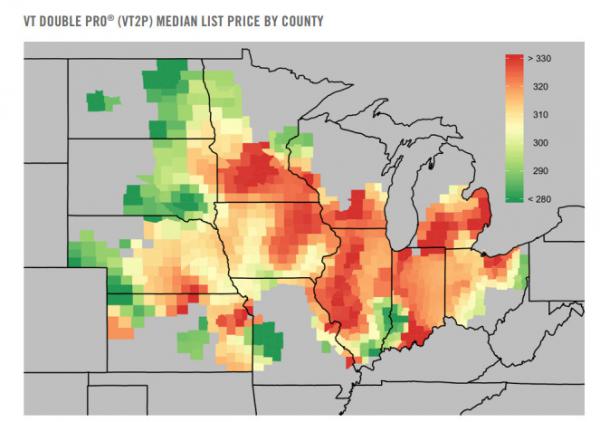 “You know, we expected there to be differences. I think we were surprised at the magnitude and the impact it has on the growers,” he said.

Harvest also reached out to the companies at the top of the seed chain that FBN points to for alleged zone pricing: Bayer, Corteva Agriscience, Syngenta and AgReliant Genetics. Bayer responded in an email without specifically addressing questions about “zone pricing,” instead generally listing things it offers beyond just seeds and chemicals, like “elite genetics,” seed treatments and technical support.

“Each year we gather farmer and dealer feedback about our products to understand how we can serve them better,” Bayer said. “Our goal is to understand grower needs and develop a portfolio of products and solutions that provide greater choices in seeds and traits that deliver with the highest performance and yield potential to support greater farmer profitability.”

Others, like Corteva and Syngenta, referred Harvest to the American Seed Trade Association, which advocates for seed retailers around the nation.

As it turns out, ASTA also represents Farmers Business Network.

ASTA President and CEO Andy LaVigne said he hadn’t seen FBN’s data on zone pricing, but noted that seed pricing is complex. It changes depending on the time of year farmers buy seed, how much they buy and what protection plans they purchase. 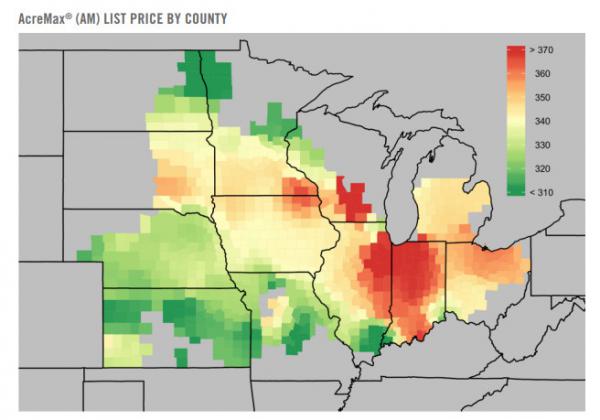 That doesn’t fully address FBN’s allegations that farmers in specific high-yield regions pay more for the same seed varieties, though.

But trust — in a local dealer or major seed company — means something, LaVigne said.

“That seed company is evaluated by that farmer every single harvest. And if they’re not delivering, that farmer is going to go somewhere else … there’s good relationships out there for generations,” he said.

Farmers have the right to ask their seed companies for more transparency, LaVigne said, “and I think seed companies will be ready to have that conversation. You know, as I’ve talked to them and they realize that as farmers are getting additional information. I guess I don’t see this as that unusual of a situation.”

“FBN is very careful with how they handle farmer data because it’s just so important to farmers,” said Fabina, who was with FBN from its launch in 2014 through 2016. “There’s a lot of financial information in there, there’s a lot of personal information.”

Fabina said that, at the beginning, many of the employees had agriculture backgrounds and farmers’ best interests at heart. But the company has grown significantly from the handful of people working in a garage: It now has more than 100 employees scattered across the United States.

It also has financial backing to the tune of hundreds of millions of dollars from big-name investors like T. Rowe Price, GV (formerly known as Google Ventures) and Temasek Holdings, owned by the government of Singapore.

Plus, FBN is jumping into the business it is trying to disrupt, selling non-GMO seeds under the brand F2F Genetics Network. It has plans to grow that side of the business, raising questions whether farmers will be able to trust the accuracy of its seed-pricing reports.

Farmer Aaron Phipps has been an FBN member for three years and said he still stands behind the company because he said the information has been solid so far and helps him bargain with his local suppliers.

“The marketers know everything and we know nothing,” said Phipps, who farms in eastern Illinois about two miles from the Indiana border. “We’ve got no point of reference when we go into negotiate with suppliers, and say ‘Hey, this is where the market’s at.’ We had no clue.”

Armed with data from FBN, Phipps said he told his local chemical supplier that he was paying more for some items than FBN showed was average, “and oddly enough, that was the first year that my chemical bill wasn’t 10% to 15% more than I thought it was going to be.”

As Farmers Business Network continues to expand its membership and offerings, Phipps is concerned that, eventually, it could be bought by one of the major agribusinesses it criticizes.

“Because then I no longer feel that they’re independent enough to make good decisions off of,” he said.

But, he added, if that happens, something will likely replace it.

“I think now that we’ve seen what can be done,” he said, “I think that the genie is out of the bottle and you can’t stuff this toothpaste back in the tube.”

Farm income has taken a long, hard fall, dropping 50 percent since hitting a high point in 2013. Add to that near-record levels of farm debt, and you have a recipe for financial stress.

But while economists say they can see storm clouds building, it’s not a full-blown crisis. That’s because relatively few farms have been pushed past the breaking point into Chapter 12 bankruptcy — or, worse, into losing the farm entirely.

Family structures—and farms themselves—are much more complicated than they used to be. Today, farm transition and land transfer are now among the hardest conversations families face. (This story was  produced in collaboration with The New Food Economy.)

Can Hacking Plants Feed the World? The Research Looks Good

Plants are good at what they do — turning sunlight into food. However, some researchers have found the leaf world could improve, and that could have a major effect on the world’s growing population.

When Is A Corporate-Environmental Partnership More Than Just PR?

As harvest wrapped up this year and the leaves turned brilliant shades of red and yellow, two of the world’s biggest agribusinesses, Archer Daniels Midland (ADM) and Smithfield Foods, announced they were pairing up on projects with environmental nonprofits.